Western Animation / Jane and the Dragon 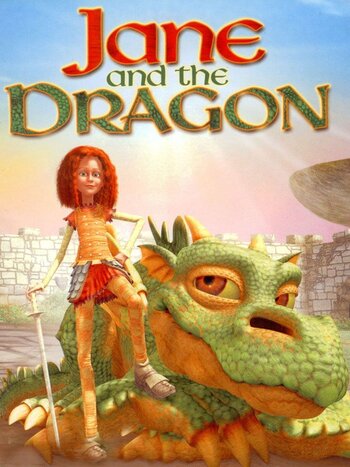 With Dragon's help I'll be a knight someday!
Advertisement:

Jane and the Dragon is a 2005 Canadian-New Zealander All-CGI Cartoon based on a series of children's books written by Martin Baynton (who helped with development on the series). Co-produced between the world-famous New Zealand-based special effects studio Weta Productions and the renowned Canadian animation studio Nelvana, the series originally aired on YTV in Canada and on ABC in Australia.

The series is about the adventures of the eponymous characters and their friends in the castle of the kingdom of Kippernia. Set in approximately the 800's, Jane is in training to become the first female knight ever. She gained the position at the age of ten when a dragon kidnapped the crown prince and she rescued him, finding out in the process that Dragon meant no harm, and thought that the prince was a key part of solving the dragon runes on his cave. After she returned with Prince Cuthbert and Dragon, King Caradoc allowed her to become a squire, which she had trained in secret for months beforehand.

The show received some glowing reviews from parents' groups and an Annie Award nomination. Despite this, Jane's adventures with her dragon were cancelled in 2006 with 26 episodes over a single season.

Jane and the Dragon provides examples of:

Jane and the Dragon

In this theme tune, Jane explains how she became a knight-in-training and Dragon's best friend.

Jane and the Dragon

In this theme tune, Jane explains how she became a knight-in-training and Dragon's best friend.