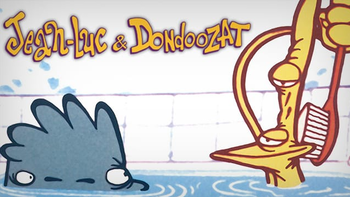 Jean-Luc & Dondoozat is a French-Canadian series of animated shorts created by Garcia "Gark" David and produced by Nelvana in Canada and Bibo Films in France.

The series follows Jean-Luc, a small green kid, and Dondoozat, a tall thin orange person with one eye above the other, and his nostrils in between them. In every episode, Jean-Luc would misbehave in some way, and get punished for it, which would result in him writing down what he learned on a piece of paper at the end of every episode.

These shorts originally aired in 2005 in France on Canal+ and Télétoon+, but also appeared in the United States as part of Cartoon Network's Animated Anthology series Sunday Pants.

Don't spend too much time on TV Tropes.
-Jean-Luc-