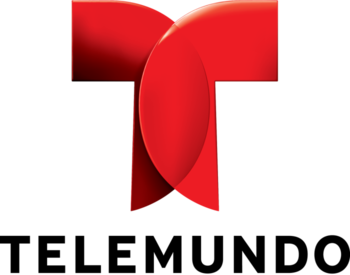 Telemundo is an U.S. Spanish-language television network. It has historically been a distant second behind the historically dominant Univision. It is a sister network wholly-owned and operated by NBC, and much like its competitors, airs a mixture of news (local and national), Telenovelas, sports (especially soccer, of course), and other programs.

Another thing unique to Telemundo is that many of its stations provide English-language Closed Captioning for its primetime programming via the CC3 channel, particularly in an effort to attract those learning Spanish, and those who would like to watch Spanish programming without the language barrier. It's an idea so innovative, that Univision eventually picked up on it too as they tried to expand their audience themselves.

The network had its start in Puerto Rico in March 1954 with the launch of WKAQ-TV 2; the territory's first television station. It was owned by Ángel Ramos, a businessman who also owned the newspaper El Mundo and the radio station WKAQ, "Radio El Mundo"; keeping with the pattern, the station branded itself as Telemundo. The new channel started off well, thanks to programs from the influential comedian Ramón "Diplo" Rivero (whose show on WKAQ radio was also quite popular at the time). It later gained an identity as "El canal de los dedos" ("The Channel of the Fingers") due to its well-known crossed fingers logo.

In 1987, WKAQ and sister station WCSV in Miami were acquired by the Reliance Group: they were part-owners of KVEA in Los Angeles, and had formed NetSpan (a competitor to the Spanish International Network, which was reorganizing as Univision) with fellow stations WNJU in New Jersey/New York and KSTS in San Jose. Reliance eventually bought out all four stations and began to operate them as the Telemundo Group. NetSpan was eventually relaunched as Telemundo, and began to sign on other affiliates.

By the 1990's, the network had become more established, and put a greater emphasis on producing original telenovelas rather than importing them like Univision did. Telemundo also poached former Univision president Joaquin Blaya as its new head.

At the time, Telemundo's national news output was provided by CNN. In 1994, Telemundo partnered with several other media companies (including Reuters, the Argentine broadcaster Clarin, and Spain's Antena 3) to launch Telenoticias, a news channel covering Latin America. The consortium sold Telenoticas to CBS in 1996. Unfortunately, the newly re-christened CBS Telenoticas (along with sister network CBS Eye on People) promptly crashed and burned, and CBS sold it back to Telemundo in 2000 to convert it into a superstation version of WKAQ.

In August 1998, new management stepped to the plate when the network was acquired by Liberty Media and Sony Pictures. The new CEO Peter Tortorici tried to differentiate Telemundo by programming it more like the major English networks, with a primetime lineup led by dramas and sitcoms rather than telenovelas. These changes made Telemundo's already minuscule viewership even worse, forcing Tortorici to resign only a year after taking the post.

The goal of his replacement, Jim McNamara, was to clean up Tortorici's mess: to better compete against Univision, he shifted the network back to a more "traditional" lineup with a reliance on imported programming. A second cable network targeted to younger audiences called mun2 (pronounced Mun Dos, now known as NBC Universo) also launched around this time, which these days mainly carries reality programming, WWE replays, extended soccer rights and Music Videos.

In 2002, NBC purchased Telemundo for $2.7 billion. NBC, being NBC, continued to make dramatic changes; they opened a new studio in Miami dedicated to producing original Spanish-language productions, began doing more International Co-productions, and also reached output deals with other Spanish broadcasters to export their original programming abroad. NBC also consolidated some of the operations of local Telemundo owned-and-operated stations located in markets with NBC-owned stations. NBC also added Telemundo to their coverage of the Olympic Games, and experimented with their use of commercial breaks to retain viewers: such as reducing the length of the first break in a program to just 60 seconds, and even airing a youth-oriented novela with only one commercial break and plenty of Product Placement.

After she got Screwed by the Network, Telemundo even tried having former (and popular) Univision personality Cristina Saralegui host a show in 2011, but it flopped. In December 2012, a new logo was introduced, trying to evoke the concept of duality (a Latino person being a part of U.S. culture) with a venn diagram-esque stylized T.

With the Spanish version of NBC's Sunday Night Football coming to the network in the 2014 season, NASCAR, along with rights to The World Cup beginning in 2018 (much to Univision's consternation), Telemundo is hoping that the NBC template of riding sports rights to ratings success rubs off on them. This is already apparent, as Mun2 was re-branded as NBC Universo in February 2015 to tie into the Super Bowl, and Telemundo's sports department was rebooted with closer ties to the English-language NBC Sports division (rather than being quasi-separate).