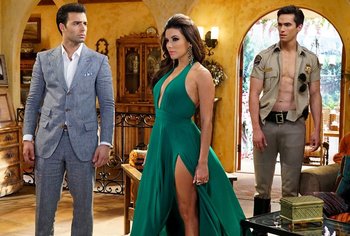 Cue wind machine.
Camila: Juan! How could you?! With my best friend, María [gasps] and the maid! [sobs]
Juan: [appearing from closet] Wait! [...] That is my twin brother, Rodrigo!
Rodrigo: It is I, Rodrigo! [smolders at camera]
Juan: [takes out a ring] I've been waiting for the right moment, for a long time...
— Intro to Camila Cabello "Havana" video
Advertisement:

Latin America and the Philippines' answer to the Soap Opera, telenovelas (Literally, "TV novels", also known as simply novelas, or "novels") are perhaps a mini-series version, not running more than five years — the current record is just over four years and the average is six to ten months — but they make up for this with ten times the drama and melodramatic acting and plot twists that would pain any drama teacher. If you want shouting, cheating, secret relatives, murder, faked deaths, and fainting in Spanish, this is where you should go. They're very passionate, which is likely why many have "Passion" in the title.

In some places the genre is referred to as "culebrón", which comes from 'culebra', a type of snake, alluding to their length and intense ups and down, akin to a snakes serpent-like movement. Of note is how the telenovela has influenced similar productions worldwide, with an Arabic genre arising that bears more than a passing resemblance, possibly because of many Middle Eastern immigrants in Latin America raving about telenovelas to their relatives, or the fact that their shorter run than soaps and high melodrama fit in better with pre-existing Eastern productions and Bollywood. Also in Spain, where Latin American telenovelas became huge between the 80s and 2000s, and ended up influencing Spaniard historical dramas, which were much more grounded, to start including in the 2010s prominent romance plots that, while never quite as melodramatic as in telenovelas, they are quite intense by comparison to traditional Spaniard dramas.

The telenovela has two main styles: the classical, or "pink", and the "modern". The first style centers on classic and melodramatic pure love stories with poor, Naïve Everygirl heroines that are often Too Dumb to Live, while the second tries to use resources from other genres and explore modern social issues without neglecting the love story side. Stereotypically, the pink telenovela is a Mexican and Venezuelan staple, the modern style is predominant in Colombia and Brazil (though Mexicans and Venezuelans occasionally try their hand at it), and Chilean and Peruvian telenovelas are a mix of both. In the United States, the telenovelas brought over to cater to the large (and growing) Spanish-speaking population tend to be almost entirely of the "pink" variety.

Curiously, a variant of telenovelas is also predominant in the Philippines that's partly influenced by Japanese, Taiwanese and Korean dramas.note Telenovelas are very notorious for their passionate declarations of love and steamy sex scenes, which are reduced or removed in the Asian dramas. These historically tend to be similar to the pink style, though the current batch of series has experimented more towards the modern style, with emphasis towards class conflict, topics normally taboo to Philippine society, and an emphasis of teaching Christian values to the audience. Philippine telenovelas also include a subgenre called telefantasyas, where it combines soap and fantasy elements together. Starting in the 2000s, Philippine telenovelas have dabbled into airing their soaps into an short-episode, non-continuous seasonal anthology format, and they have also adapted old drama films that have been expanded and deviated into the small screen.

Spanish and Portuguese speakers often run their soaps in Prime Time in countries where those are the major languages, like Commonwealth countries do of soaps. This is important compared to the US, where they won't make it to regular programming in daylight hours, let alone a good time slot. This means that Univision and other Spanish networks (e.g. Telemundo) can easily broadcast their novelas in the US whenever they want, which can include marathons all week if they so please, which understandably makes the target audience (supposedly elderly Latin American women with nothing else to do) very happy. This may also be helped by there being a significant US-led telenovela market, with many being produced in Miami. There's also a cable channel dedicated exclusively to showing telenovelas, Pasiones TV

("Passions TV"), which is broadcast in Latin America and the US.

Another odd fact is that there are often telenovelas produced that are aimed at a child audience, with the same drama transplanted onto (more) teenagers than the regular programming. There are also many shows that recognize the melodrama of the telenovela and play with the genre, including possibly having a Soap Within a Show.

The word "telenovela" literally translates as "TV novel", but in some Spanish-speaking countries "novela" is rarely used for actual novels (instead often used as slang for Harlequin/Mills and Boon-type novellas, which telenovelas share a lot of tropes with), which is why the 'tele-' can be dropped and not confuse anyone. In some countries, like Chile, they may be called "teleseries" (spelled "teleseryes" in the Philippines), which obviously shows how prevalent they can be. In addition, episodes for any TV series can be referred to as "capítulos" (chapters).

Not to be confused with the TV series Telenovela.