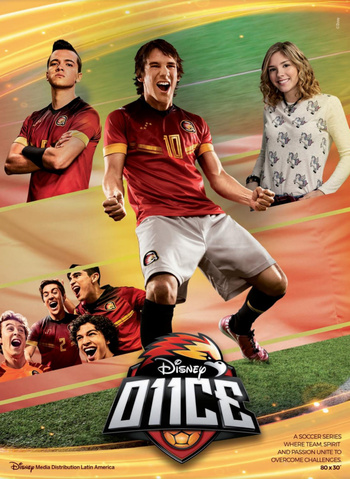 Pictured (clockwise from top left): Lorenzo, Gabo, Zoe and part of the team including Those Two Guys Ricky and Dede.
Advertisement:

O11CE note  pronounced in Spanish Once, and known in English as Disney 11 is an Argentine Disney XD LA series, part of the Disney Channel LA universe along with Violetta, Soy Luna, BIA and Juacas.

Gabo Moreti, a small-town boy with a passion for football, is chosen to become a Scholarship Student at the presigious school IAD note  Instituto Academico Deportivo (Institute of Academics and Sports) . He leaves his hometown, his grandmother and his best friend Felipe to receive top-notch education and training. Now, it's up to Gabo to keep up with the Institute's high academic and athletic standards and lead the Golden Hawks team to victory.

Note: this page is based on the original Spanish-language version, not the English dub. As such, there may be differences in translation.