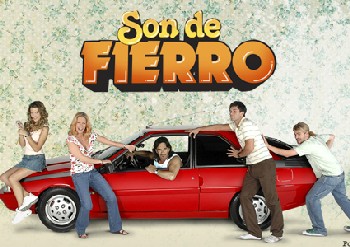 Perhaps the car will move if Sandi does not sit over the motor...
Son de Fierro was a 2008 Argentine TV series, featuring the "Fierro" family. The name plays with words in Spanish, and could be translated as either "They are the Fierro" or "They can be relied upon" (just like iron).
Advertisement:

The parents of the family were Martín Fierro (no relation with the gaucho literary character) and Lucía Fierro. They had four sons: the young adults Juan and Ezequiel, and the teenagers Lucho and Sandi. Juan is blind, but managed to become a high school history teacher. Ezequiel, an adopted son, works at the butcher shop with Martín and Amadeo, Sandi's best friend. Sandi began to study medicine, but became a vedette instead. Lucho goes to school, and, even through he doesn't know it, is an adopted son as well. And there's even more people at the Fierro house: Lucía's mother and sister Mimicha and Sissi, and Martín's brother Ángel.

Love relations: Juan is torn between his assistant Rita and his student Morena Fontana (daughter of the school's principal). Lucho likes Morena, but to no avail; he would end with Karina, another student. José María Fontana, the principal, is an old love of Lucía, but never saw any action.Despite not knowing it, both Sandi and Amadeo love each other, although he's married to Sandi's friend Mabel and has a son. Don Martín, Martín's father, is gay and lives with his boyfriend Rafa.

It began as a comedy, but by the middle of the year, the series became Darker and Edgier. Martín and Lucía broke up and got new couples, Juan Cruz and Isabel, and Juan's relation with Morena was exposed, leading to his removal from school. He ended married with Rita (who secretly outed his relation with Morena), but Juan eventually left her, and returned with Morena. After several failures to keep him with her, Rita is revealed to be a mad serial killer, and even killed him by accident, when trying to kill Morena. Morena was pregnant, and had a son of Juan after his death.

The series was remade in Mexico as "Alma de Hierro".