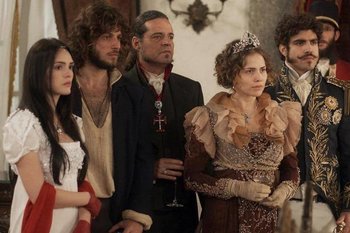 Back in the year of 1817, Prince of Brazil Pedro I

would first meet his arranged bride, Maria Leopoldina of Austria. What history never told you, though, is that the Princess's ship to the New World brought along quite a few people who would then engage in their own amusing love stories, until the royal couple declared Brazil an empire independent from Portugal in 1822.

Closest to the Princess for her trip was her Portuguese teacher from England, Anna Millman. She would soon become the object of affection of Joaquim Martinho, an actor from Portugal who boarded the ship impromptu for escaping from the troubles of his wife, Elvira Matamouros, also a Portuguese actress. He would also need to deal with Thomas Johnson, an English navy officer who has his own reasons for wanting Anna as well. And many more people waiting to show up.

This is the main cast of Novo Mundo ("New World"), the 89th of Rede Globo's 6-o'clock soap operas. Written by Alessandro Marson and Thereza Falcão, chapters aired in Brazil from Mondays through Saturdays, from March 22nd until September 25th 2017, with a total of around 157 chapters (no official list).