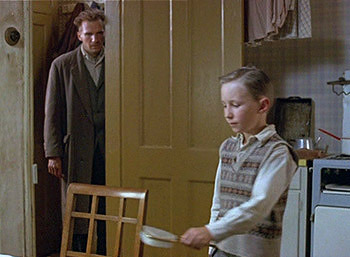 And That Little Boy Was Me
"Okay. Gotcha. Like I'm in a movie. Only I'm the movie. Or something."
— Hal Jordan, Green Lantern: Emerald Dawn
Advertisement:

Let's face it: flashbacks can be pretty boring. At the end of the day, they are a blatant form of exposition that can make it feel like the story has been put on hold, and depending on the circumstances, may only serve as a recap for information the audience is already fully aware of. But since they are also the most direct way to explain a character's past if you want to keep to the all-important Show, Don't Tell rule of storytelling, they're an inevitability in many genres. So what's a good method of making flashbacks not boring? One popular variant, particularly in fantasy and science-fiction works, is to have the flashbackee or someone else be an observer to the events.

There are a few ways that this can be achieved within the narrative, but the end result is that the character is now walking around in a representation of their or someone else's memories. This leads to moments of them echoing the audience by asking questions like "Was I really like that?" or "How did such a sweet kid become so cruel?" If it's their own memories and another person is in there with them, this fellow observer may berate them for their pathetic life choices or show them what they have to live for. In some cases the character may be dealing with False Memories, and so must use the details they're seeing to reconstruct the truth of their past.

The Trope Namer is the pensieve, a magical object in the Harry Potter universe that allows characters to do just this.

Similar to the Exposition Beam, which essentially transfers these memories from one character to another, allowing them to experience it in their own POV. Can overlap with Time Travel, particularly Intangible Time Travel, if the character is actually sent back in time to view the events of their past.