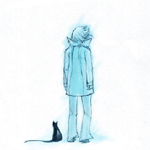 The world is made up of cities, and the spaces between them.
Advertisement:

HERO is a story about a perfectly ordinary boy with no memory of the past and no urgency for the future, who one day accepts a most extraordinary offer to travel to distant places and invisible cities.

It is a fantasy Webcomic with allegorical overtones, written and drawn by Malaysian artist Hwei-Lin Lim. Its plot follows the travels of the boy as he sets out to see the world and attempts to answer lingering questions about his identity. As of September 2018 it spans 300 pages and 13 chapters out of planned 15. The first page is here

The comic itself is illustrated with flowing, watercolor-esque digital painting rather than cartoony artwork. In place of speech bubbles or other text boxes, the story is told entirely through custom Alt Text (actually DHTML tooltips). The thoughtful first-person narration is maintained even in action scenes, or other tense situations.