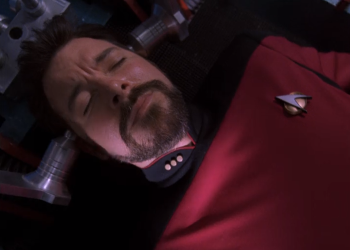 Don't worry, they're not feeding him more clips from season one.

The Enterprise is on a routine mission to chart an unusually dense globular cluster. Riker starts the morning feeling unusually tired, and arrives late for the morning briefing in engineering. After some technobabble discussion on how best to speed up the charting of the cluster, Data reminds Riker of his poetry recital in Ten Forward. At the recital, while most of the attendees are merely bored, Riker can barely stay awake, and falls asleep in the middle of Data's "Ode to Spot".

Riker sees Dr. Crusher about his fatigue, where he reports feeling constantly exhausted and on edge, despite getting a full night's sleep as far as he can tell. Crusher doesn't find anything physically wrong with him, and so sends him home with a recipe for a warm milk toddy and an invitation to return tomorrow if it doesn't help.

In engineering, Data is discussing his poetry with La Forge before they are interrupted when the sensors report an EPS overload in cargy bay 4. An emergency team is dispatched, but they find nothing out of the ordinary, leading La Forge to hypothesize that it was a sensor glitch caused by their recent modifications. Riker asks La Forge to wake him at 0700 the next morning because of his recent sleep troubles.

La Forge obliges, but Riker has no memory of falling asleep, and refuses to believe it's morning until he checks the clock. Suspicion mounts as further strange occurrences are noticed: Worf and Riker both have panicked reactions to ordinary stimuli, La Forge's visor starts randomly cutting out, and Data, of all people, finds that he has lost over an hour of time. La Forge observes that many of these events took place in the same cargo bay, and sure enough, they find a Negative Space Wedgie forming there from a deep layer of subspace that shouldn't be able to exist in normal space.

When Riker goes to Troi about his unexplained panic attack, she remarks that other crewmembers have reported similar problems, and decides to bring them all together to talk about it. They eventually go to the holodeck to try and recreate a repressed memory they all seem to share. The end result is a nightmarish operating table with a surgical arm in a dark room filled with a cacophony of alien clicking sounds.

More evidence appears indicating that random crewmembers are being abducted into another subspace dimension, where they are sedated and experimented upon. To make matters worse, the anomaly in the cargo bay starts expanding into a subspace rift. The senior staff come up with a strategy to stop the rift, but need a way to identify the exact dimension where it is originating. Since Riker has been abducted several nights in a row, he volunteers to take a homing device with him the next time it happens, which will allow the Enterprise to track him as he leaves.

Dr. Crusher gives Riker a stimulant in the hope that it will counteract the sedative used by the abductors. Riker goes to bed, and soon finds himself pulled into the other dimension. There, he finds himself on a surgical table being examined by robed aliens, alongside Ensign Rager, who was previously discovered missing. He feigns sleep until the Enterprise begins to close the rift, at which point he is able to grab Rager and escape through the rift while the aliens are distracted.

Despite resistance by the aliens, the Enterprise is able to close the rift once Riker makes it through, and the abductions cease. They believe the aliens had established a pocket of "normal" space in their laboratory in order to experiment on the crew, and the rift in the cargo bay was their attempt to create a pocket of their own space in the Enterprise's universe. Data hypothesizes that the aliens may simply have been curious, but Riker strongly disagrees…

Riker: Ensign Rager and I were lucky to have escaped. Lieutenant Hagler's dead. Whoever it was sent that thing was more than simply curious.