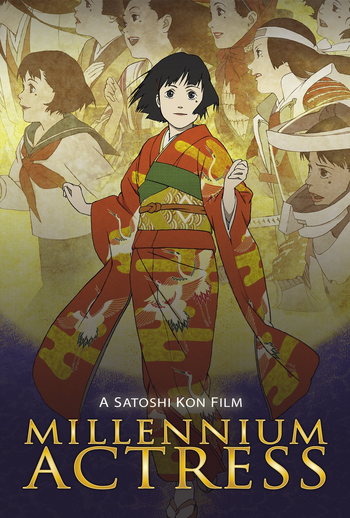 Director Genya Tachibana, who has been making a documentary about reclusive (and retired) movie star Chiyoko Fujiwara, manages to secure a rare interview with her. The informal and deeply impassioned interview covers her career from her first movie, made a few years after the Japanese invaded Manchuria, to her retirement in the mid-sixties—along with her love life, including her marriage to (and divorce from) her most prominent director. Much of the story is told using episodes and scenes from her movies, the settings of which span a millennium — from the Heian period (794-1185) to a futuristic space age, with the various scene and era changes lampshaded by Kyouji Ida, Genya's snarky but seemingly imperturbable cameraman. Along the way Kyouji and Chiyoko discover that Genya has much deeper connections to Chiyoko than either of the latter would have any way of knowing.

Millennium Actress won a slew of anime awards both in Japan and abroad, some of them shared (or split) with Spirited Away. The film was inspired by Real Life actress Setsuko Hara, who retired from the business in 1962 and never said a word to the press from then until her death in 2015 at the age of 95.