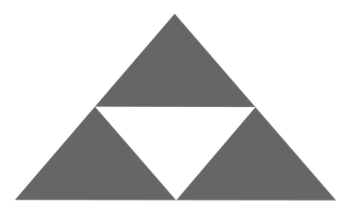 The crest of the Hojo, who held the real power.
Advertisement:

In 1185 Minamoto no Yoritomo won the Genpei War, accepted the rank of Sei-i Taishōgun, or, in it's shortened form, Shogun, and became the defacto ruler of Japan. In 1192, he made it official and set up a military-feudal government at Kamakura. The age of the Samurai had begun. Four years later, he died. His son Yoriie took over, but as he was a minor, his father-in-law, Hōjō Tokimasa (ironically related to the Taira) ruled as Shikken, or regent for the Shogun. They grew to hate each other, so Yoriie was assassinated and replaced with his brother, Sanetomo. In 1219, Sanetomo was also assassinated (by Yoriie's son), effectively ending Minamoto rule. Tokimasa, slowly but surely proving himself a bald-faced Evil Chancellor (not to mention a kinslayer for directly ordering Yoriie's death), would in turn, be ousted by his own children: Masako (the widow of Yoritomo and the mother of the two assasinated shoguns) and her brother Yoshitoki, who would eventually consolidate and solidify the rule of the Hōjō Regency.

They would, not unlike the Taira they were related to, establish closer links with the Imperial household and even import Fujiwara princes/noblemen to become the figurehead shoguns of the regime. Nevertheless, the country would be officially run by the Shikken and Rensho (Deputy Regent), and unofficially run by the Tokusō (The head of the Hōjō clan)—maintaining the military/samurai-centric nature of government. The Kamakura Shogunate lasted 135 years, 9 Shoguns, and 16 Shikkens. As part of a feudalistic reform, the Shōen system of manors was expanded, to include the Gokenin, both the Shugo (the official title of the Daimyo before the Sengoku era) and the Jito (who helped the Shugo). Another notable position was the Kanrei (Deputy Shogun), expected to represent shogunal authority on the regional level. Throughout the existence of the shogunate, the relative stability of the period is dependent on maintaining the tenuous Balance of Power between the shugos and the kanreis, ensuring they keep their reverence to the Emperor, as well as maintaining their loyalty to Kamakura. The eventual inability of Kamakura to do this (as well as the self-sabotaging tendencies of the later Muromachi shogunate) eventually gave rise to the sentiment that authority needs to be centralized on one strong leadership, and an unbroken line of succession.

The Hōjō Regency had to face the invasion of the Mongol Empire (then under Kublai Khan, the grandson of the legendary Genghis Khan). Two invasions fleets were launched from the Korean Peninsula for two campaigns (on the years 1274 and 1281, respectively). The ground battles of the first invasion were going well for the Mongol forces (with no small amount of valiant samurai holding their lines in multiple Last Stands). The second invasion fared worse for the Mongols—as the Japanese, having better intelligence, managed to fend off the landings and keep the naval fights at stalemate. Both attempts ultimately had to end because the naval forces were serendipitously struck by typhoons on both instances. The survivors of the typhoon fallouts were eventually captured and executed. The fortuitous winds have since been labelled kamikaze ("divine wind"), and have become foundational in the national myth of Japanese identity.note This has also, obversely, triggered a longstanding obsession for conquest by would-be Japanese hegemons—to follow the route of the Mongol invasion to the Korean peninsula and conquer the larger Chinese mainland. In later centuries, Oda Nobunaga is documented to have harbored this ambition as his next step after accomplishing the unification of Japan. Toyotomi Hideyoshi, his successor, would later attempt this himself with two invasions of Korea (in 1592 [the Imjin Disturbance] and 1598 [Chongyu War])—both also ironically ending in failure. It would not be until the rise of Imperial Japan (starting with the Russo-Japanese War) that this conquest will be attempted with some success.

The leadership of the Hōjō Regency during the Mongol Invasion, despite a number of squabbling and competition for glory by a number of warlords, was ably steered by the regent Hōjō Tokimune. The upstanding character of Tokimune (and his devotion to Zen Buddhism) has made him a celebrated character amongst the warrior classes. His successors as heads of the Hōjō clan, however, fatally fell short of his example. His son Sadatoki would allow the squabbling of his clansmen to devolve into vendettas—and his successor, Takatoki would be considered dissolute, immoral, and easily-led by favorites, if not flat-out insane. The degradation of the Hōjō Regency into corruption and in-fighting would embolden the contemporary Emperor, Go-Daigo, to reassert his political authority and attract the samurai clans away from the Hōjō.

It all ended after the 1333 Siege of Kamakura, the Kenmu Restoration led by Emperor Go-Daigo, and then the Muromachi Shogunate (founded by the Emperor's ambitious and wily general Ashikaga Takauji—who ironically is actually related to the Genji, and would use his claim to validate authority over the Taira-related Hōjō and the Emperor), succeeding it. Much of the administrative reforms laid down here will be continued, with varying success, until it all comes crashing down during the Sengoku Period. It is generally the least well-known of the three shogunates (but is seen as relatively stabler than its Ashikaga successors). They will both be dwarfed by the Tokugawa bakufu three centuries later. Notably, Tokugawa Ieyasu himself would be an avid student of this period, keeping a copy of the official history of the period as his personal reading, probably treating the tumultuous history of the period as a guide of what not to do. Given the relative stability of the Tokugawa bakufu, it probably worked.

On an interesting legacy note, the Triforce from The Legend of Zelda is based on the Hōjō crest, three triangles forming a bigger triangle, with a triangular hole in the middle.