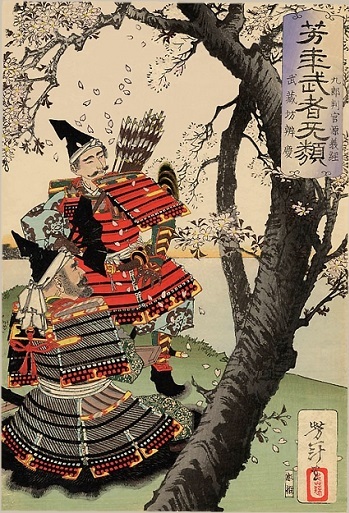 note Musashibo is a title, his name is Saito Benkei in the Japanese tradition, but people simply refer to him as Musashibo Benkei (1155–1189), popularly and simply called Benkei, was a Japanese warrior monk who served Minamoto no Yoshitsune. He is commonly depicted as a man of great strength and loyalty, and a popular subject of Japanese folklore.

Stories about Benkei's birth vary considerably. One tells how his father was the head of a temple shrine who had raped his mother, the daughter of a blacksmith. Another sees him as the offspring of a temple god. Some legends

even claim his mother was impregnated by a block of iron. Many give him the attributes of a demon, a monster child with wild hair and long teeth. In his youth, Benkei may have been called Oniwakanote demon/ogre child, and there are many famous ukiyo-e works themed on Oniwakamaru and his adventures. He is said to have defeated 200 men in each battle he was personally involved in.

He joined the cloister at an early age and traveled widely among the Buddhist monasteries of Japan. During this period, monasteries were important centers of administration and culture, but also military powers in their own right. Like many other monks, Benkei was probably trained in the use of the naginata. At the age of seventeen, he was said to have been over 2 metres (6 ft 7 in) tall. At this point, he left the Buddhist monastery and became a yamabushi, a member of a sect of mountain ascetics who were recognizable by their black caps. Japanese prints often show Benkei wearing this cap.

Benkei is said to have posted himself at Gojō Bridge in Kyoto, where he disarmed every passing swordsman, eventually collecting 999 swords. On his 1000th duel, Benkei was defeated by Minamoto no Yoshitsune, a son of the warlord Minamoto no Yoshitomo. Henceforth, he became a retainer of Yoshitsune and fought with him in the Genpei War against the Taira clan. Yoshitsune is credited with most of the Minamoto clan's successes against the Taira, especially the final naval battle of Dannoura. After their ultimate triumph, however, Yoshitsune's elder brother Minamoto no Yoritomo turned against him.

During the two-year ordeal that followed, Benkei accompanied Yoshitsune as an outlaw. In the end, they were encircled in the castle of Koromogawa no tate. As Yoshitsune retired to the inner keep of the castle to commit seppuku on his own, Benkei fought on at the bridge in front of the main gate to protect Yoshitsune. It is said that the soldiers were afraid to cross the bridge to confront him, and all that did met swift death at the hands of the gigantic man, who killed in excess of 300 fully trained soldiers. Long after the battle should have been over, the soldiers noticed that the arrow-riddled, wound-covered Benkei was standing still. When the soldiers dared to cross the bridge and look more closely, the giant fell to the ground, having died in a standing position. This is known as the "Standing Death of Benkei".

He's quite possibly the Ur-Example of Died Standing Up and one of the biggest Badasses in Japanese history.