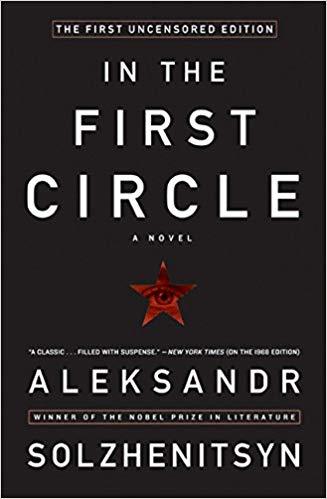 The First Circle is a 1968 novel by Aleksandr Solzhenitsyn.

Story of life in a sharashka in the late 1940s. A sharashka is the first circle of the Gulag hell. A prison for highly trained or educated prisoners who are more valuable working for the state in an intellectual capacity then as common labor. In exchange for their efforts the Zeks (prisoners) are given privileges and rewards. Do a good enough job and potentially they can earn their freedom and pardons directly from Josef Stalin. Do a bad enough job, and go deeper into the system. They are not free, yet have a respite from the rest of the prison system. Can be considered the sequel to The Gulag Archipelago as in Aleksandr Solzhenitsyn's life he left The Gulag to the sharashka due to lies he put on his informational card putting his profession as Nuclear Physicist.

Loads and Loads of Characters, each with a different backstory, crime against the state and role in the camp. Crimes vary from being German to marking a ballot against Stalin, to questioning political decisions in a letter.

The sharashka's focus is on telecommunications technology, with the goal to produce a phone for Stalin himself that is both high quality and secure. The telecommunications experience means when an important phone call giving evidence of espionage is recorded the sharashka is tuned in to analyze the call. Much angst ensures as the morality of helping the state that imprisoned them imprison more is debated. The subject of the phone call differs between the original and lighter addition. In the first, which Solzhenitsyn believed could not be ever published in the Soviet Union, the phone call is a warning to the West of Soviet atomic weapon espionage. In the lighter version the call is related to medical supplies sought in the west.

Alternative Title(s): In The First Circle