Literature / The Five People You Meet in Heaven 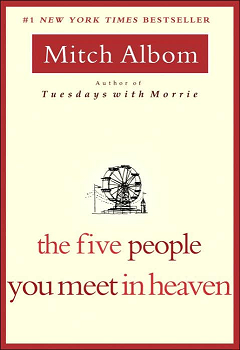 In an amusement park called Ruby Pier, an old man named Eddie works as the head of maintenance. One day a ride malfunctions and he gives his life to rescue a trapped little girl. The rest of the novel follows his journey through Heaven, meeting people who've touched his life, or whose lives he's touched. A Made-for-TV Movie was made in 2004, starring Jon Voight.

A sequel novel, the next person you meet in heaven, was published in 2019.