Literature / For Whom the Bell Tolls 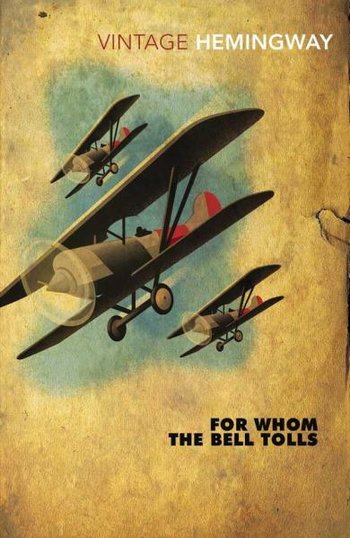 "No man is an Iland, intire of it selfe; every man is a peece of the Continent, a part of the maine; if a Clod bee washed away by the Sea, Europe is the lesse, as well as if a Promontorie were, as well as if a Mannor of thy friends or of thine owne were; any mans death diminishes me, because I am involved in Mankinde; And therefore never send to know for whom the bell tolls; It tolls for thee."
— John Donne, quoted in the epigraph
Advertisement:

For Whom the Bell Tolls is a novel by Ernest Hemingway, first published in 1940, and was inspired by his experience as a journalist during the Spanish Civil War. It is one of his most famous and beloved works, and is generally considered the book written about that war.

The story, which plays out over four days and three nights, is centered around Robert Jordan - no, not that Robert Jordan - an American member of the International Brigades who joined to fight for the Republic. His mission is to blow up a bridge in preparation for an offensive against the Nationalists, and to this purpose he enlists the help of a small band of partisans in the hills nearby. He quickly begins an affair and falls in love with a girl called Maria, who has been freed from the captivity of the Fascists a few months prior.

In the days before he carries out this task, we get to know many of the other characters that he meets. Pablo is the leader of the band, but the relationship between him and his men is strained to say the least, and his reliability is repeatedly called into question. His wife Pilar is The Heart of the group, and acknowledged as the de facto leader. An elderly man named Anselmo is Robert Jordan's guide, and while he is averse to killing out of principle, his loyalty and local knowledge make him a valuable asset. And finally Agustin, a particularly foul mouthed guerrilla who Robert Jordan develops a Vitriolic Best Buds relationship with. A number of Pablo's men and other characters are also introduced and make a lasting impression.

Over the short time in the company of these people, Jordan makes his preparations for the demolition (which can only be carried out at the last minute), has some skirmishes with the Nationalist forces and gets much of his companions' backstory in the form of flashbacks. The general themes of the novel, derived both from the main storyline and the flashbacks, include the horrors of war, but also the nature of love and companionship.

The novel was adapted into a film in 1943, starring Gary Cooper as Robert Jordan and Ingrid Bergman as Maria. It also inspired the eponymous Filk Song by Metallica. It also inspired the graphic novel Sordo (or The (Silent) War note  No not that one. in English-speaking countries); which got a film adaptation on Netflix in 2020. See also the character page.

Alternative Title(s): For Whom The Bell Tolls