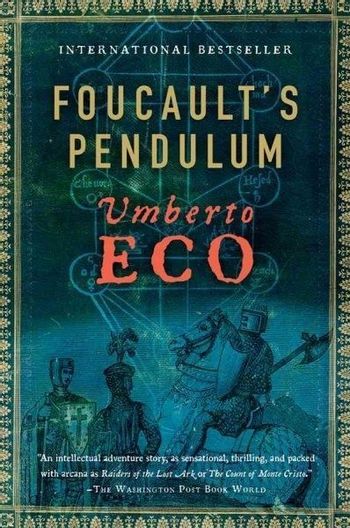 Foucault's Pendulum is a 1988 novel by Umberto Eco, and a notable work of conspiracy literature.
Advertisement:

While The Da Vinci Code plays the conspiracy theory view of history completely straight, and Illuminatus! subverts it wildly, this novel is an elaborate and sometimes savage Deconstruction.

The narrative contains numerous flashbacks, dream sequences, and historical anecdotes, but the basic plot is this:

Casaubon, while working on his degree, meets Belbo at a bar one night and they have a conversation during which Casaubon reveals his field of expertise - the history of the Poor Fellow-Soldiers of Christ and of the Temple of Solomon, also known as the Knights Templar. Belbo, who works for a publisher named Garamond who specializes in academic works and doubles as a vanity press for various crackpots and assorted nuts with pretensions to intellectualism, finds Casaubon interesting and invites him to visit the publisher. Casaubon is introduced to Diotallevi and is allowed to be present and re-presented as a "topical expert" while they interview an aspiring author, Colonel Ardenti, who presents a manuscript. This turns out to be a book purporting to expose the secret of the Templars, which Ardenti believes to be dangerous knowledge.

Sure enough, the man disappears mysteriously, but the police investigation goes nowhere. Casaubon moves to Brazil, where he hooks up with a radical socialist girlfriend named Amparo and later meets a man named Agliè who is an expert in occultism. Agliè likes to tell historical stories as though he were there in person. Eventually, Amparo leaves Casaubon, and Casaubon moves back to Italy.

Upon his return, Casaubon becomes a freelance researcher and accepts work from Garamond, first on a history of metals, and then a history of occultism. He also meets and falls in love with a woman named Lia. During their projects, he, Belbo, and Diotallevi meet many odd characters from the occult world of conspiracy theories and secret histories, partly with the help of Agliè who has contacts there. Bemused and bored by the inanity of the various conspiracy theories they are require to listen to, read about, and publish, the trio decide one night to fabricate their own arcane history based on the idea that one root occult conspiracy is the cause of all world historical events. This byzantine, chimerical super conspiracy they enigmatically designate "The Plan".

Over Lia's objections, Casaubon and his partners become more and more invested in the Plan they have created, but then unwisely start hinting to Agliè that they possess knowledge he does not. Agliè, Ardenti, and other members of the European occult community decide that they are meant to be in control of history, and start chasing after the (completely synthetic) secret of the Plan, starting by pursuing the trio of protagonists themselves.