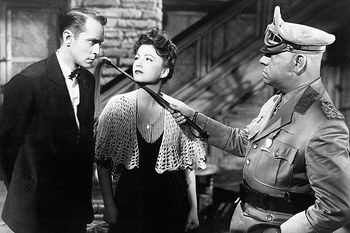 June, 1942: Erwin Rommel and his Afrika Corps have launched an offensive that has sent the British into headlong retreat out of Libya and into Egypt. Cpl. John Bramble, the sole survivor of a British tank hit in battle with Rommel, staggers delirious into the dusty desert hamlet of Sidi Halfaya, and into a hotel owned by avuncular Farid, and staffed by Mouche the maid (Baxter). Not much more than an hour or so later, the advancing Germans, including Erwin Rommel himself (von Stroheim), also arrive in town.

In order to avoid capture and imprisonment, Bramble changes into civilian dress and assumes the identity of Davos, the hotel waiter, who was killed the night before in a German bombing raid. He soon learns that Davos the waiter was actually a German spy. He also learns that Rommel has five caches of fuel and supplies—the "five graves"—hidden in the Egyptian desert, supplies that he badly needs in order to keep advancing and capture Cairo. Bramble thus has to figure out where the German supply dumps are, while preventing the Germans from figuring out who he is before they smuggle him back into the Allied lines.

Notable for being the only screen depiction of Rommel made when the real one was still alive.