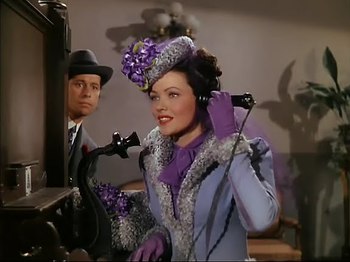 He can't wait to meet her.
Heaven Can Wait is a 1943 American comedy film produced and directed by Ernst Lubitsch, starring Gene Tierney, Don Ameche, and Charles Coburn. The screenplay was written by Samson Raphaelson, based on the play Birthday by Leslie Bush-Fekete. The film was nominated for three Academy Awards: Best Picture, Best Director and Best Cinematography - Color.
Advertisement:

The film follows Henry Van Cleve (Ameche), a man hoping to prove he deserves a place in Hell by recounting his life story to the Devil at the reception of Hell. Henry talks of his life, in which he was the spoiled only child of an upper-class family. For much of his youth, including childhood, he spent his time chasing various women. The day before his 26th birthday, he meets and falls in love with the beautiful Martha Strabel (Tierney). Though she is engaged to his obnoxious cousin Albert, Henry is able persuade her to elope with him. The rest of their marriage chronicles both and happiness and difficulty they face in staying together.

Despite the title, has no connection with the Warren Beatty film Heaven Can Wait, which is actually a remake of Here Comes Mr. Jordan.note This was actually used as a plot point in the film Hostage, where the MacGuffin is encoded on a DVD for this film, but it gets confused with the other one.