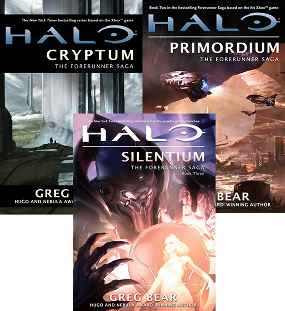 "ONE HUNDRED THOUSAND YEARS AGO, the galaxy was populated by a great variety of beings. But one species—eons beyond all the others in both technology and knowledge—achieved dominance. They ruled in peace but met opposition with quick and brutal effectiveness. They were the Forerunners—the keepers of the Mantle, the next stage of life in the Universe's Living Time. And then they vanished. This is their story."
— Cryptum jacket description
Advertisement:

The Forerunner Saga is a trilogy of science fiction novels by Greg Bear, set in the distant past of the Halo universe. Notably, the series is the first to focus on the life of the eponymous Forerunners and the intricacies of their civilization.

The first novel, Halo: Cryptum, was released in January 2011. The story is told as a first-person narrative, from the perspective of Bornstellar Makes Eternal Lasting, a rebellious young Forerunner fed up with the social rules of Forerunner society. He is sent to a remote mining colony called Edom by his father to learn discipline, but instead he gets caught up in an adventure involving Ancient Conspiracy, Sealed Evil in a Can and Lost Superweapons.

The second novel, Halo: Primordium, was released in January 2012. It covers the adventures of Chakas, a human introduced in the first novel, as he and a select few others journey across Halo Installation 07, seeking to find a way to escape and survive while also avoiding a malevolent entity's grasp, all the while discovering things about the virulent entity known as the Flood.

The third and final novel, Halo: Silentium, was released March 2013. It is presented as a series of Forerunner logs detailing the final days of their civilization.