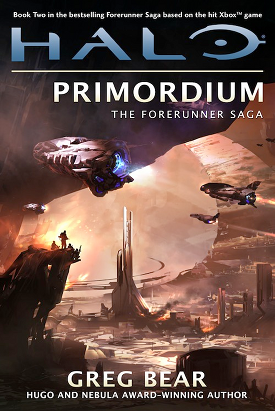 Halo: Primordium is the second book in The Forerunner Saga, a trilogy of Halo Expanded Universe novels by Greg Bear, published in 2012. The book takes place during the time of the Forerunners, the ancient race that built the Halo rings encountered in the games. Though mostly set during the Forerunners' war with the Flood, the novel is told as a series of logs narrated by a Forerunner Monitor discovered by an ONI science team. The monitor explains that it was once a human named Chakas (one of the main characters of the previous novel Halo: Cryptum) and proceeds to tell its story, which turns out to involve a lot of walking around on a Halo.