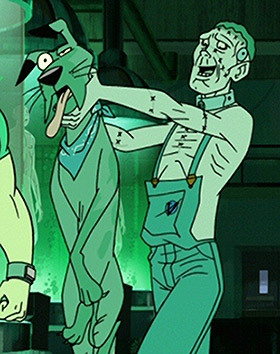 "Why, yes, Dr. Venture, I can see people just lining up for your resurrections!"
"Sometimes, dead is better."
— The Central Theme of Pet Sematary
Advertisement:

Sometimes, death is not a cheap event that's easily undone, but a dramatic, soul-scouring event. Even if Magic and Powers exist, most would say cheating it is flat-out impossible. However, if you really love someone, nothing's impossible, right? By technology or magic, by the power of the Gods or the grace of the Old Ones, surely there is a way...

...Well, yeah, it is possible, but you won't like the result. Seriously. It's not a pretty picture.

Basically, an attempt to resurrect someone from the dead — usually a Love Interest, sometimes a family member, a close friend or even one's self — will end badly. This can be due to unfortunate circumstances, external tampering, or the setting itself being constrained by an Equivalent Exchange or Fantastic Aesop that makes all such attempts Go Horribly Wrong. There are several ways this could go badly:

Often falls under Equivalent Exchange explaining why it doesn't work. Other times a Fantastic Aesop behind why those who've had Death by Origin Story can't come back. If Only Mostly Dead has also been used or the setting includes powerful White Magic, it can seem like Sour Grapes.

Sometimes this can happen even in a universe where coming Back from the Dead can be done without incident, if the resurrection's not performed competently, done without important supplies, or intentionally sabotaged.

Compare Creating Life and the opposite, Came Back Strong. (Although, on some occasions the two Tropes are not mutually exclusive.) See also Harmful Healing, Unwanted Revival, and Resurrection Sickness.

Sometimes a Zombie Apocalypse can be a Came Back Wrong on a massive scale.

Most examples fall into one of the above-listed subtypes. Only examples that don't fit one of those should be included specifically on this page.

Not to be confused with That Came Out Wrong.

As a Death Trope (or a partial nullification of it), many if not all spoilers will be unmarked ahead. You Have Been Warned.