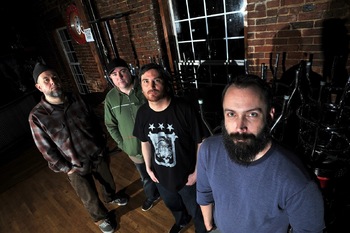 The rockin' crew as of 2011. From left to right: Jean-Paul Gaster, Tim Sult, Dan Maines and Neil Fallon.
Advertisement:

Clutch is a hard rock/heavy metal band from The Beltway area of the eastern United States. Known of their blending of styles between heavy metal, blues, and punk (among others), and their out-there lyrics, Clutch has developed a strong cult following in North America.

Originally dismissed as Helmet wannabes due to stylistic similarities (being a Post-Hardcore/Noise Rock styled Alternative Metal band), Clutch developed a unique, distinctive sound over the years. Among the noticeable changes is lead singer Neil Fallon's vocal development from guttural growler/shouter to a more nuanced, bluesy sound.

Clutch has never broken through big-time in the mainstream, although many of their songs have managed to become ear worms. Their songs have appeared in the following media: