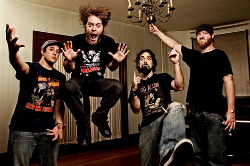 CKY is either an Alternative Rock or an Alternative Metal group whose roots date back to 1992. They are known for utilizing unique sounding distortion and heavy rift based songs. The band currently consists of singer/guitarist Chad I. Ginsberg, drummer Jess Margera, and bassist Matt Deis.

The two began recording new material in January 1997, which would be released months later as their self-titled second EP cassette (referred to as the Gold Tape), limited to 500 copies. Oil continued on through November 1997, when they started recording their first official album (which would later become CKY's Volume 1). It was during these recording sessions where they met engineer / producer Chad Ginsburg. Chad was attracted to Oil's song "Disengage the Simulator," and was asked to join the band as a second guitarist. This addition is the true beginning of CKY.

By 1998, with a concrete writing core of Chad Ginsburg, Jess Margera, Deron Miller, and their live bassist Ryan Bruni, Oil dissolved. Sitting around a pizza place in West Chester, Deron came up with Camp Kill Yourself as the new band name, the new direction, the new movement. No more mainstream and no more pop appeal. Camp Kill Yourself finished writing and recording their first album as a group. The album, titled Volume 1, was released on February 27, 1999. The same day, they released an unofficial compilation album titled Volume 2; the CD contained demos, B Sides, and prank phone calls, serving as a soundtrack album for Jess' brother's first skate video.

That June, preparing to play the 2000 Warped Tour, Chad recruited their fourth live bassist, Vernon Zaborowski, who would be their most concrete bass player to date. During the tour, the band put out their first EP, Disengage the Simulator, which was limited to 2,000 copies. Starting that October, CKY's music appeared on the hit MTV show Jackass generating a flood of new fans. The show also featured band members themselves on certain episodes. The band went strong for a good while after that, releasing four studio albums total up to 2009.

Although the band is still going, The New '10s saw nasty inter-band drama that caused a lack of releases for eight years and ultimately resulted in long time frontman Deron Miller quitting and fronting his own version of itnote Actually his other full time band at the time called "Foreign Objects", the Deron fronted band would go by "CKY+Foreign Objects" and then "Mecha CKY" before settling on "96 Bitter Beings" after Deron admitted that having 2 competing bands just hurt both of them. CKY itself now performs as a trio, with Chad now performing vocals. After a short break, in which Chad released a solo album, Rock n Roll Alibis, the band finally released their fifth album in 2017, fittingly titled The Phoenix.

The group is also known for their "Ask CKY" section of their website which features over 10,000 questions from fans answered by the group as well as being very approachable honest people offstage.

The band has examples of the following tropes: