Film / Wake Me When It's Over 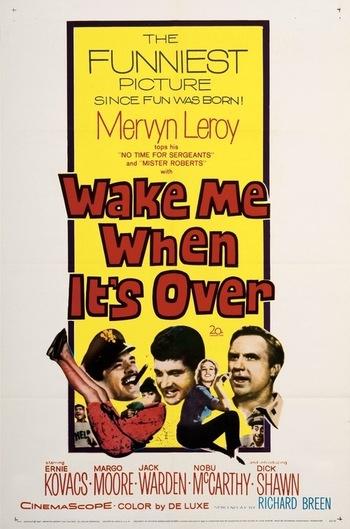 "You've heard of Hell? Well, when it first got started, it was a new idea, so they hadda test it out. This here island is the place they picked."
— Hap Cosgrove, describing Shima
Advertisement:

Wake Me When It's Over is a 1960 comedy film directed by Mervyn LeRoy and starring Dick Shawn, Ernie Kovacs, Margo Moore, and Jack Warden.

The movie follows what is cryptically referred to as the "Brubaker Case", a U.S. military investigation which has gained national attention. Said investigation centers around Gus Brubaker (Shawn), a draftee who had spent World War II in the European theater and was more than willing to leave the U.S. Air Force at the earliest possible moment. In an attempt to collect on his G.I. insurance, Gus accidentally re-enlists in the Air Force and is sent to Shima, a backwater island off the coast of Japan with a reputation for driving airmen insane with boredom. Gus fears slowly losing his own mind when the discovery of a nearby hot spring inspires him to partner with Capt. Charlie Stark (Kovacs) in building a hotel on Shima.

Things then start going downhill when nosy brass start getting wind of Shima turning into a tourist attraction almost overnight, and the Air Force decides that there is only one man responsible: Gus.

Wake Me When It's Over contains examples of: