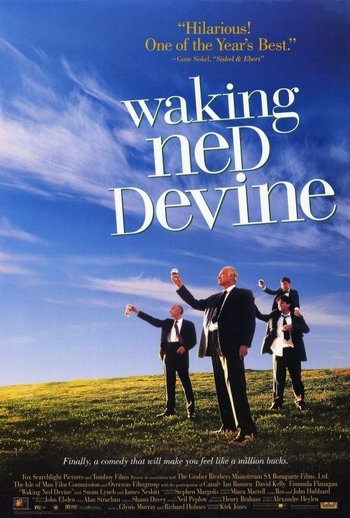 Waking Ned Devine is a 1998 British comedy written and directed by Kirk Jones and set in rural Ireland, but filmed on the Isle of Man.

Jackie O'Shea (Ian Bannen) is a middle-aged man living in the rural Irish town of Tullymore with his wife, Annie (Fionnula Flanagan). When they discover that someone local has won the lottery, they team up with Jackie's friend Michael (David Kelly) to figure out which of their neighbors is soon to be much wealthier. The lucky man is the titular Ned Devine (Jimmy Keogh), who died from the shock of seeing the winning numbers. After speaking to Ned in a dream, Jackie decides to pretend to be Ned to collect their winnings. Needless to say, Hilarity Ensues once the lottery man arrives earlier than expected and Michael has to play Ned instead.

There's also a Love Triangle amongst the residents who are closer to 30 years old than to 60 years old, and the two apparently youngest characters take a scene or two to talk about God and provide commentary on events.

This film contains examples of the following tropes (some of which are inherently spoileriffic).