Screw the Money, I Have Rules! 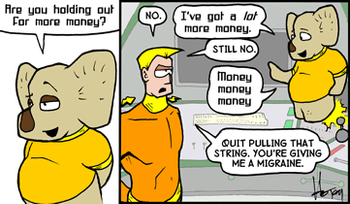 Knowing Captain Tagon, this is really saying something.
"Working covert ops, you learn to exploit weakness: You manipulate greed, fear, pride, to make people do what you want. But when you're dealing with true believers, those weaknesses aren't there. All you can do is help, or get out of the way."
— Burn Notice, "Truth and Reconciliation"
Advertisement:

For some people, money isn't an issue. Maybe a hero/heroine's morals and convictions are so strong that they can never be bought out, not even for all the money and riches in the world. Maybe someone is so committed to a goal he'll spend all the money he has to in order to reach it. Or perhaps there are some people who just don't need the money; the warm fuzzy feeling after doing a good deed is reward enough. Or there is simply no amount of money that can replace what they were stripped of. Whatever the reason, wealth comes second to personal values. Even a chance at matrimony may not be enough.

Note that this does not necessarily mean "wealth comes second to good personal values." This is a very common trope for Knight Templar types, and outright Chaotic Evil villains can enact it too, given Even Evil Has Standards, as can people who give amusement a higher priority than personal gain. The Honest Corporate Executive lives by this mantra.

Of course, it's not unknown for it to be a Secret Test of Character with a Sweet and Sour Grapes.

Compare Money Is Not Power, Keep the Reward, Honor Before Reason, What You Are in the Dark, Doing It for the Art, Screw the Rules, I'm Doing What's Right!. The Last DJ is a specific character type who is likely to do this, although he may pay for it, especially in missed opportunities. If the character's refusal includes making the situation even worse for the offerer, that's a Bribe Backfire.

See also Screw the Money, This Is Personal!, when the character refuses pay not because of personal integrity, but because they'd rather get revenge on the person trying to buy them off.

Contrast Screw the Rules, I Have Money! (the obvious inversion of this trope), Only in It for the Money, and Every Man Has His Price.

open/close all folders
Anime & Manga
Comic Books
Fan Works
Films — Animated
Films — Live-Action
Literature
Live-Action TV
Squid Game, Loser Protagonist Gi-hun tries to leave the Deadly Game offering millions in prize money, only to discover that his mother is Secretly Dying from diabetes because of him cancelling their insurance to feed his gambling addiction. He goes to everyone he knows begging for money to pay for the treatment, including his ex-wife and her well-off new husband. The husband then offers Gi-hun the money he needs on the condition that he stop trying to contact his daughter, causing Gi-hun to punch him while shouting that money can't solve everything.
Music
Professional Wrestling
Radio
Theater
Video Games
Webcomics
Web Original
Western Animation
Real Life
There are some people money can't buy. For everyone else, there's Tropercard™. ...Wait, let me try that again...