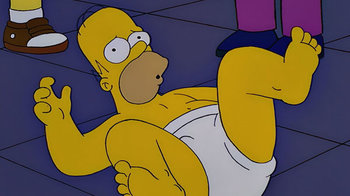 With the family in dire straits once again, Homer decides to ask Mr. Burns for a raise, but Burns has a better plan: hire Homer as his personal jester (or "prank monkey") while Smithers takes time off to go to New Mexico to star in a musical he wrote about Malibu Stacy. But when the pranks escalate to being gross and humiliating, Homer must choose between making money for his family or retaining his dignity.

"Homer vs. Dignity" contains examples of: