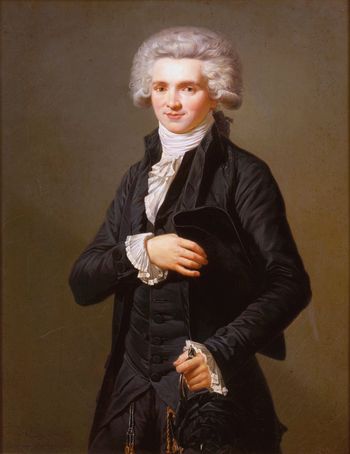 Citizens, do you want a Revolution without a Revolution?
"Our revolution has made me feel the full force of the axiom that history is fiction and I am convinced that chance and intrigue have produced more heroes than genius and virtue."
Advertisement:

Maximilien Marie Isidore de Robespierre (6 May 1758 – 28 July 1794) was a major figure of The French Revolution. To this very day, he remains one of the most controversial figures in the history of France and Europe.

When Louis XVI convened the meeting of the Estates-General, Robespierre became one of the many young deputies who found a career in political office open to them for the first time. Before the Estates-General was called, Robespierre was a rising, well-respected young attorney in the provincial town of Arras. Originally appointed a judge in a local criminal court, Robespierre actually resigned because of his principled opposition to the death penalty, and if that sounds like a bit of ironic foreshadowing, well, congratulations on reading ahead.

At the Estates-General, Robespierre, while not initially a very important figure, pretty much always stood on the left, and he gained some renown for his firm sense of rectitude and principal. Later he was among the signatories of the Tennis Court Oath. In the National Assembly, Robespierre became notable for criticizing limited suffrage and for condemning a constitutional defense of slavery. He became popular among Parisian Radicals for advocating universal male suffrage, rights for minorities (Jews, Protestants, Blacks), abolition of slavery and the death penalty. He also attained prominence in the newly formed Jacobin Club and played a major role in taking the nominally bi-partisan club to a radical direction after the Champ de Mars massacre

During the short lived constitutional monarchy, many revolutionaries, including the moderate Girondins, advocated going to war in order to spread the ideas of the French Revolution. Robespierre, who was not seated in the newly formed Legislative Assembly due to a rule that he pushed for which banned members of the National Assembly from serving in the new legislative body, took a hardline stance against the war. But his position was unpopular at the time, and war was declared and fully backed by the King and Queen (which Robespierre pointed out was enough reason to be skeptical of the entire project). He regained prominence after the August 10, 1792 Insurrection against the King, when he became one of many deputies elected, for the first time via universal male suffrage, to the National Convention.

Robespierre's notoriety begins with his participation in the debate on the trial of King Louis XVI. He famously reversed his former protest against the death penalty, citing the King's treason as grounds for immediate summary execution and his death justifiable as a war measure. The mismanagement of the war and the mounting paranoia among Parisian street radicals led to bitter factionalism, culminating in a second insurrection against the Girondins, which made the Jacobins the majority party in the Convention. In the fifth year of his political career, Robespierre gained true political power as one of the 12 members (and the most publicly known and prominent) of the Committee of Public Safety. Citing wartime conditions, they suspended the newly written 1793 Constitution (the most radical document of The Enlightenment era) and instituted a policy they called "the Terror".

Robespierre was never actually the dictator or in any way the sole leader of France. He was the intellectual and moral backbone for the Committee while it ran the country; however, his influence within the Committee was subject to the machinations of other members and tended to ebb and flow. While he is usually portrayed (and not without reason) as the personification of the worst excesses of the Revolution, he actually fought as ferociously against radicals as he did royalists. He also played a role in recalling brutal and corrupt mission representatives such as Joseph Fouche, Jean-Baptiste Carrier, Jean-Lamber Tallien and Paul Barras. His own political position, while radical left, favored the emerging middle class of artisans and small businessmen (who he subsidized during the Terror), geared towards wealth redistribution and what we would call, today, the welfare state.

Robespierre's fastidious, self-righteous nature, while often winning him loyal support from the Parisian working class, could also be intensely alienating, especially since people who offended his moral sensibilities tended to get their heads removed from their bodies. And as the early months of 1794 passed, his increasing fanaticism and willingness to kill all who stood in the way of creating his precious Republic of Virtue began alienating just about everyone. Robespierre's tolerance for dissent and disagreement was, at this point, utterly non-existent, and he saw conspiracy and treason on all sides. He believed there was one true path to Virtue, and it was an extraordinarily narrow path, to the extent that he saw all those on either the right or the left of that path as traitors and spies.

All of this led to a schism and fall-out with erstwhile Jacobin allies such as Hebert and even personal friends like Danton and Desmoulins. He sent all of these men to the guillotine, though, in the case of Danton, he tried desperately to avoid such an action. His downfall was the result of the fact that he had alienated virtually all his former allies — moderates, extremists, the National Convention, even the radical Paris Sections. The events of his downfall (occurring on 9 Thermidor of the French Revolutionary Calendar) has since become proverbial as Full-Circle Revolution. While it marked the end of the radical and violent phase, it also ended the reform and progressive initiatives undertaken in the same period (which included price ceilings, widespread government participation, meritocracy and the abolition of slavery). The largest mass execution in the Revolution happened the day after Robespierre's death, when 77 loyalists were guillotined in a single day.

In the aftermath, Thermidorians gave him and other radicals (which had formerly included themselves) a Historical Villain Upgrade as a "bloodthirsty dictator" that endures to this day. Already in the post-revolutionary era, later observers, from Cambaceres to Napoleon, (including the ones who turned on him such as Barere and Billaud-Varenne) questioned this narrative and noted how his reputation and influence was greatly exaggerated. Others such as Gracchus Babeuf, a Hebertist who had initially welcomed the "death of the tyrant", lamented how Poor Communication Kills, noting, "To awaken Robespierre is to awaken democracy itself."

A highly controversial person, Robespierre became in the 19th and early 20th Century the personification of the Knight Templar radical for whom Utopia Justifies the Means, combining personal probity (he was called "The Incorruptible" and it wasn't ironic in any way) with a vindictive, self-righteous streak. He became in Lord Acton's words, the most hateful character in the forefront of history since Machiavelli reduced to a code the wickedness of public men. Later critics argue that Robespierre set a precedent for the likes of Vladimir Lenin and one of his most recent biographies is entitled "Fatal Purity." Other critics have questioned this reading and argue that his life and actions was subject to a smear campaign in the vein of Richard III, making him the The Scapegoat for revolutionary excesses. There are groups of historians and organizations who hope to rehabilitate his reputation to a more balanced level. The vast majority of fictional depictions, however, subject him to a Historical Villain Upgrade.