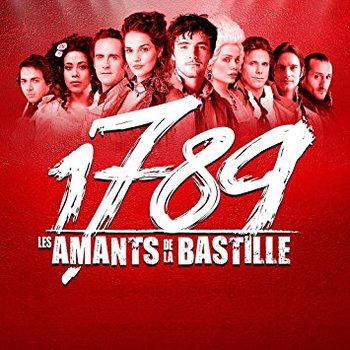 1789: Les Amants de la Bastille is a French stage musical by, among other writers, Dove Attia and Albert Cohen (co-producers of Mozart L'Opera Rock). The musical debuted in 2012 at the Palais des Sports in Paris and was a commercial success, with several of its songs being released as singles, and a cast album which was successful in the French music charts. It follows Ronan Mazurier, a young peasant who, after swearing to avenge the death of his father, leaves his home to go to Paris and join the republican revolutionaries there. While in Paris, Ronan meets Olympe du Puget - governess of the royal children - and the two, despite being from different sides of the conflict, fall in love. They are what gives the musical its title - Ronan and Olympe are the amants de la Bastille (lovers of the Bastille). It is notable for its contemporary soundtrack and choreography, and won Best Musical at the Crystal Globes in 2013.