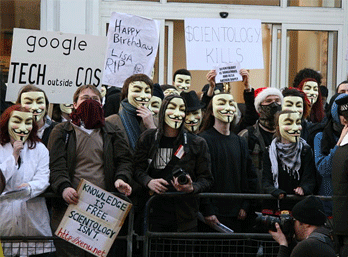 Whenever a revolution is taking place, when people rebel against an authority, certain motifs often come to be associated with the uprisings. This can take the form of many things such as gestures, songs, objects, figureheads, phrases or even landmarks. Basically anything that can be used to symbolize a societal/political upheaval. The nature of the icon means that it frequently becomes memetic among supporters of the rebellion.

Certain icons, hand gestures being the most common, tend to be reused across media and history alike. The "V" gesture

(Index and middle fingers pointing upwards with the rest of the hand held in a fist and facing away from the user) is a symbol in the V (1983) miniseries, was used to represent the anti-war movement of The '60s, and also stood for the Victory of the Allies in World War II.

Because the icon is usually something that is fairly innocuous, it can be displayed openly amongst rebels as a subversive sort of "Screw you" to the people in power. Only in the most Orwellian of societies is this ever punished.