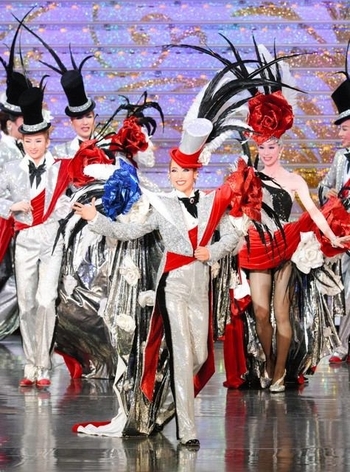 The Takarazuka Revue is an all-women Japanese musical theatre company operating out of Takarazuka, in the Hyōgo Prefecture of Japan. Established in 1913 and based upon the original casting format of Kabuki Theatre, Takarazuka productions stand out for having highly-trained female actresses play all of the roles. The company is divided into five troupes: Moon (Tsuki), Flower (Hana), Cosmos (Sora), Star (Hoshi), and Snow (Yuki). Outside of these, there are also senka (lit. "professional") actresses who belong to no one troupe (used to, though), are older/more experienced, and are cast in more "seasoned" roles.

The company is popular with female audiences, as the performances are usually very melodramatic and elaborately designed, with loads of gorgeous costumes, and handsome male characters who are masculine without its worst traits (such as coarseness or over-sexual behaviour). Actresses are required to be trained for two years at a special (and very prestigious) in-house school. After their first year of training, the class is split up into two specialisations: musumeyaku (woman's role) and otokoyaku (man's role). The latter are groomed to play the Cross Cast Roles: during this time the actresses cut their hair short, wear pants rather than skirts, and speak with masculine pronouns. Musumeyaku and otokoyaku are almost exclusively cast in their designated roles, though some otokoyaku can also play female roles and musumeyaku are often cast as young children regardless of gender.

Within the troupes, there's a strict hierarchy that the actresses work towards being promoted upwards in. The head of the troupe is the top star (highest-ranked otokoyaku) - the "leading man", so to speak, who plays the principal male role, is the troupe's representative, and responsible for keeping order in the troupe. Her partner is the top musumeyaku, who plays the principal female role (usually the otokoyaku's love interest, but not necessarily). The second-highest-ranked otokoyaku is the nibante, third is the sanbante, so on and so forth. It usually takes about ten years for an otokoyaku to work herself up to a coveted rank. That being said, not all otokoyaku aspire to or achieve being a top star, as it's a very stressful position that requires a lot of interpersonal skills, talent, willpower, and energy.

While the shoujo concept of Bifauxnen is more or less derived from this, it's interesting to note that both roles are extremely popular with younger fangirls (apart from the main audience of women in their 30s to 50s). The obvious implications are not lost on people; many shows will make an overt joke on the tastes of said fangirls, although officially the company tends to avoid commenting on the phenomenon.

Also of note: Anime pioneer Osamu Tezuka's hometown is also the base of the Revue; Tezuka was a fan all his life, and wrote a clause into his will that left a small portion of his fortune to the company to help finance future productions. In turn, Takarazuka produced a musical based on his Black Jack in 1994.

For more information, including an extensive list of actresses and shows, see TakaWiki

Shows they have performed:

References to them in fiction: