Theatre / I Am from Austria 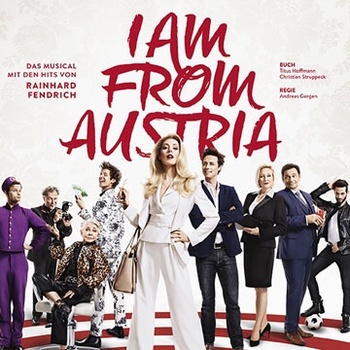 A Jukebox Musical featuring the music of Rainhard Fendrich, with an original plot telling the story of an internationally successful Austrian film star, Emma Carter, who returns to Vienna to attend the famous annual Opera Ball. Her supposedly secret stay at the Hotel Edler gets leaked to the press via Twitter by an overeager bellboy, and when the Edlers' son Josi decides to apologize to the special guest with one of their famous Edlertorte, sparks begin to fly between Emma and Josi. Meanwhile, the Edlers - Romy and Wolfgang, owners of the hotel - desperately try to get the final half star in order to make their hotel a five-star organization and worthy of the elite, as well as fix their marriage as Romy is Married to the Job and Wolfgang seems to have eyes on younger beauties. Emma's manager Richard Rattinger tries his best to keep her successful and safe.

The musical had its world premiere at the Raimund Theater in Vienna on September 16, 2017 and closed on June 16, 2019, starring Iréna Flury and Lukas Perman as Emma and Josi. The Takarazuka Revue production ran from October 10, 2019 to December 28, 2019, with Tamaki Ryou as Josi and Misono Sakura as Emma.