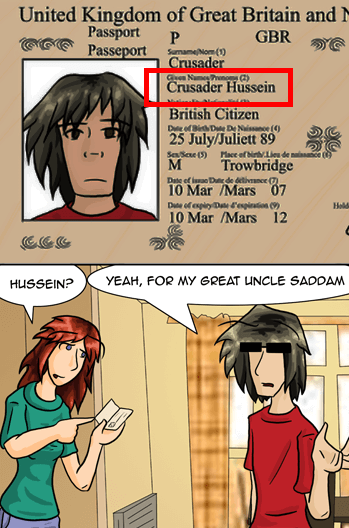 Dick Grayson: My name's Richard Grayson, but all the kids at the orphanage call me Dick.
Bruce Wayne: Well, children can be cruel.
— The LEGO Batman Movie
Advertisement:

A name of a person, place, or thing is seen as hilarious and/or offensive In-Universe.

Characters under this trope are saddled with a name that realistically, you wouldn't expect a parent to name their kid or, for someone who's of a certain name, they'd choose to go by. This is the kind of name that gets kids made fun of in school — which leads them to snark "Never Heard That One Before" when the jokes continue into adulthood. Real Joke Name is another possible outcome.

Comes in a variety of forms:

Given human nature, quite a few fairly common names or words wind up as slang terms. Simply having one of these isn't really an example of this trope, unless it forms a particularly bad combination with the rest of the name, and the name's misfortune must be pointed out within the work.

This trope can be divided into subtropes Embarrassing First Name, Embarrassing Middle Name or Embarrassing Last Name, if just part of the name is unfortunate. Will frequently intersect with Punny Name. When other people pronounce them counterintuitively (whether in an effort to save themselves the embarrassment or not), they'll feel compelled to inform people how their name is pronounced with Pretentious Pronunciation.

This only goes for examples where the name is the character or person's legal given name, or the name they most commonly go by. If a character chooses this name as a superhero alias, stage name, or temporary disguise, it's Atrocious Alias. If a product or brand instead of a character is unfortunately named, it's Bite the Wax Tadpole.

This trope is the opposite of Awesome McCoolname, while Special Person, Normal Name lies in between these two. There's also Names to Run Away from Really Fast, where your name isn't so much embarrassing as deeply scary.

Freshly Cut Grass introduces himself to the party and explains his theming after smells his creator likes. The moment he brings up Pussy, the party ends up corpsing.

Freshly Cut Grass introduces himself to the party and explains his theming after smells his creator likes. The moment he brings up Pussy, the party ends up corpsing.