Film / Four Sisters and a Wedding 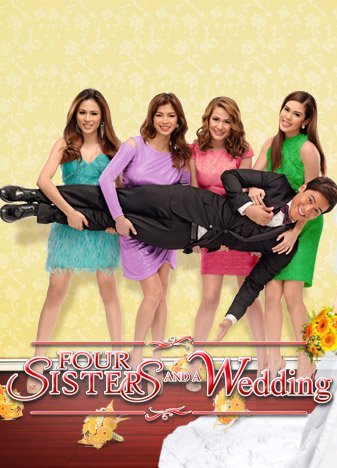 Four Sisters and a Wedding is a 2013 Filipino comedy-drama film directed by Cathy Garcia-Molina.

When their youngest sibling and only brother CJ (Enchong Dee) announces that he's getting married to his girlfriend of four months in two weeks, the Salazar sisters all rush home and plan to stop the wedding, since they don't believe that they are truly compatible. However, it doesn't take long for their reunion to expose the cracks in their familial and personal relationships and threaten to bring long-simmering issues to the surface.

Oldest sister Teddie (Toni Gonzaga) has to hide that she was fired from her teaching job in Spain and now works dual jobs as a waitress and a maid to send money home to her family. Sophisticated second sister Bobbie (Bea Alonzo) has a high-paying job in New York, but isn't quite ready to take the next step with her boyfriend Tristan (Sam Milby), in part because rebellious third sister Alex (Angel Locsin), an indie filmmaker, is still dating the ex-fiance Bobbie left behind when she went to America. Sensible youngest sister Gabbie (Shaina Magdayao) just tries to keep a handle on everybody else and stop the meddling from getting out of hand. Naturally, hilarity — and some lighthearted commentary about Filipino family dynamics — ensues.

The film got a prequel-sequel in 2020 titled Four Sisters Before the Wedding. A few years after the first film, the siblings remember an incident in their youths in which they attempted to stop their parents' marriage from crumbling.

Four Sisters and a Wedding contains examples of:

Four Sisters Before the Wedding contains examples of: