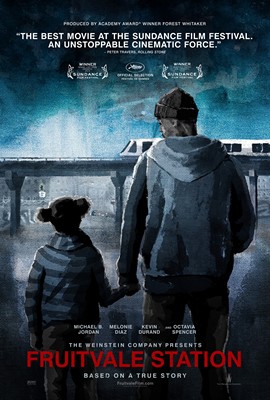 Every step brings you closer to the edge.
Advertisement:

Fruitvale Station is a 2013 biographical film written and directed by Ryan Coogler in his feature debut.

The film revolves around Oscar Grant (Michael B. Jordan), a 22-year-old Bay Area resident who decides to spend New Year's Eve 2008 getting a head start on his New Year's resolutions, including improving his relationships with his mother (Octavia Spencer), girlfriend (Melonie Diaz), and daughter (Ariana Neal). As he crosses paths with friends and strangers over the course of the day, everything comes to a head with a fateful encounter with the police at the Fruitvale BART station.

Based on a True Story, the movie premiered at the Sundance Film Festival (under the name of simply Fruitvale) before moving on to the Cannes Film Festival, playing to great reviews in both venues, with much of the praise given to Michael B. Jordan's performance in the lead role. It was given a limited release in theatres on July 12, 2013.

While it is based in real events, discussing the tropes found within this work will significantly spoil the entire film. If you have not done so already, watch the movie first, then come back. You Have Been Warned.

Tropes applying to Fruitvale Station include: