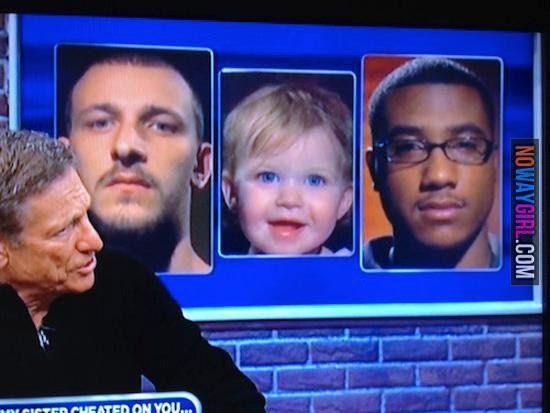 It is discovered that a character, or a baby, has a parent whose identity is not known. Solution? Get a DNA test. Prove beyond a reasonable doubt who the father really is, and proceed from there. All the other guys who aren't the dad can go home. (Well, unless the real daddy is a Glorified Sperm Donor and the fake one has actually been there for the kid their whole life. In which case, go take a hike sperm daddy.)

This trope can also occur with mothers, but that's a much rarer occurrence (barring a babynapping, a switcheroo with a different newborn, or a delivery while the woman is unconscious, the mother knows the baby she just birthed is her own). This test can also be used indirectly to link siblings together. In any case, how long it takes for the DNA test to get finished typically depends on the speed of the plot. The DNA test could present complications: if the bad guys know about the test, they may attempt to keep the Status Quo by altering the test results (of course, they must force other characters into secrecy about that, and in any case it won't last for long).

May result in a Surprise Incest, if the character was in a relationship with someone who turned out to be a relation.

Almost always happens at some point after a Luke, I Might Be Your Father revelation. Also happens if a woman decides to have My Secret Pregnancy. The Trope Breaker for Mama's Baby, Papa's Maybe.