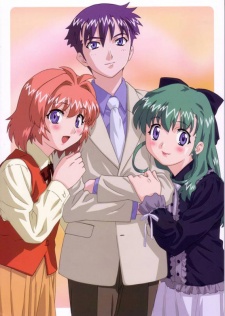 A sequel to Please Teacher!, Please Twins! (Onegai Twins!) centers on Maiku Kamishiro, who moves into town looking for his childhood home, showed in a picture of him playing with his long-lost sister. He soon meets two young girls, Miina Miyafuji and Karen Onodera, who both also have the same picture. But there are only two kids in the picture, and neither of them know which is the sister. To make matters worse, both girls become rather attached to Maiku.

The series, of course, includes appearances by the characters of the previous series, showing how they've fared since the end of Onegai Teacher. It is also notable for being the first work in the long-running partnership/friendship between voice actresses Mai Nakahara and Ai Shimizu.