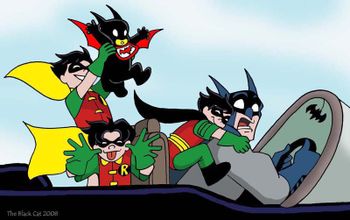 Inspired by the comic Tiny Titans, the-dark-cat/The Black Cat not only portrays Batman as a superhero/crime fighting detective, but also as a single father trying to raise his four sons: Dick, Jason, and Tim (the three most famous Robins), and a baby named Terry. It pokes fun at topical points in comics, such as the Dark Knight, Batman's 70th Anniversary, and Grant Morrison. It also occasionally features other DC superheroes and their respective sidekicks/kids.

Batman and Sons provides examples of: