Comic Book / A Death in the Family 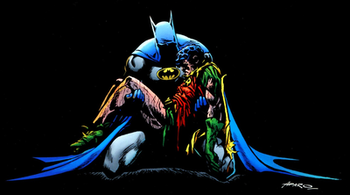 A rare instance of a story literally phoning in the conclusion.
Advertisement:

A Death in the Family is a Batman comic book story arc first published in the late 1980s, which gave fans the ability to influence the story through voting with a 900 number. "A Death in the Family" ran in Batman #426-429, published in 1988-1989. The story was credited to Jim Starlin (script), Jim Aparo (pencil), Mike DeCarlo (ink), Adrienne Roy (color), and John Costanza (lettering). Covers were illustrated by Mike Mignola. The story is also collected as a trade paperback under the title Batman: A Death in the Family, which has gone through multiple printings and is still available today.

The story is divided up into four chapters, but all centre on the life and death of Jason Todd, the second Robin. Prior to this, Jason's backstory had been changed in the aftermath of Crisis on Infinite Earths. No longer the redheaded child of circus acrobats slain by Killer Croc, Jason was re-imagined as a vagrant who first ran into Batman after stealing the tires off of the Batmobile. After rescuing him from a school dedicated to creating young criminals, Batman recruited the young boy to be the new Robin, as the original, Dick Grayson, had left and became his own man following being shot by the Joker. However, Jason was still full of rage and he would channel it during his beatdowns, culminating in an ambiguous ending where Jason chases down the son of a foreign diplomat in revenge for the girl he killed, only for the man to fall to his death, leaving it unknown to both Batman and the readers if the man slipped and fell or if Jason crossed the line and pushed him. Fans did not like the Darker and Edgier Robin and something had to be done. Unsure whether to kill Todd off or simply retool his character, the staff set up a phone poll to let readers decide, inspired by a 1982 episode of Saturday Night Live where Eddie Murphy used a similar stunt to decide the fate of a live lobster in a chef's kitchen.

In the beginning of the story, Jason and Bruce are in uniform hiding behind some crates while a mob plans. Then, out of the blue, an impatient Jason leaps out from behind the crates and attacks the criminals. When the struggle is over, Bruce asks him what the devil he was doing and said one of these times he is going to get killed. Bruce then asks him if he thinks this is a game, and Jason replies "Yes, life is a game." Bruce therefore relieves him from duty and asks him about his parents. Jason resents this and storms out, refusing to discuss the issue.

A short while later, Jason bumps into a person from his past, who gives him a box containing some evidence that the persons he knew as his parents aren't actually his biological mom and dad. Believing that his mother is alive somewhere, Jason takes off to find her and Batman is reluctantly forced to join him. Their initial efforts prove fruitless, but eventually they track his mother to a refugee aid camp in Ethiopia. Unfortunately for Jason, the Joker has plans for him and his mother, and Chapter 1 ends with Jason dead, Batman mournfully holding his body in his arms à la La Pietà. The fans got what they wanted, only to regret it as soon as they got it.

Chapter 2 involves Batman's attempts to get even with the Joker for what he did, which are complicated by the Joker becoming Iran's representative at the United Nations, which grants him Diplomatic Impunity and leads the US Government to recruit Superman to prevent Bruce from doing anything that could cause a diplomatic incident. When the Joker tries to gas-bomb the UN Chambers, Superman and Batman team up to stop him. Unfortunately for Batman, though, Joker ends up going down in a helicopter that crashes into the ocean, and of course he comes back later. Batman laments that things between him and the Joker always end that way: unresolved.

The later chapters dealt with Batman falling into a Heroic BSoD that saw him becoming increasingly brutal and fatalistic because of his unresolved guilt over Jason's death, as well as the efforts of Tim Drake, a young boy who idolized Dick Grayson, to convince Dick to be Batman's Robin again, believing that only a sidekick could snap Bruce out of his funk. Ironically, these events paved the way for Tim himself to take the mantle of Robin.

The story was loosely adapted into the prologue of the DC Universe Animated Original Movies film Batman: Under the Red Hood, which also featured the follow-up comic storyline "Under the Hood", but changed it to be a Ra's al Ghul distraction plot Gone Horribly Wrong and Word Of God revealed that this event happened in the Time Skip between seasons one and two of Young Justice (2010). DC Showcase – Batman: Death in the Family, released in 2020, is an interactive short that gives the viewer the choice to have Batman save Robin, have him die, or have him cheat death, each choice leading to new scenarios with their own consequences. The actors from Under the Red Hood reprised their roles.

Not to be confused with James Agee's Pulitzer Prize-winning novel A Death in the Family. Or with Death of the Family, another Batman storyline published in 2012.