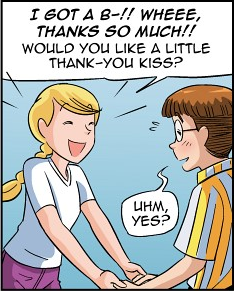 And by little, she means "French."
"Did it turn you on? Watching her up there in front of all those brainiacs knowing she was the smartest one in the room?"
— Lilah Morgan, Angel
Advertisement:

Geeks and nerds often have it rough in the romance department, especially in popular culture. Typically, they are stereotyped as being so unattractive that only fellow nerds would find them desirable mates. However, it is interest and intellect that makes the nerd, not looks. And for some folks, intelligence is very, very attractive.

Another name for this trope would be sapiosexual.

This trope shows what happens when a character finds that a nerd is, indeed, sexy. The nerd's "objective" looks could fall anywhere within the wide spectrum of human attractiveness; all that matters is that a character finds something about the nerd that arouses his or her interest. If said character is in high school, he or she may grow up to be a Hot Scientist.

Compare Endearingly Dorky, where characters are charmed by dorks (who may or may not be nerds as well). See also Hot Librarian, Hot Scientist, Geeky Turn-On, Bespectacled Cutie, Nerdcore, Lovable Nerd and Give Geeks a Chance. Sometimes overlaps with Matzo Fever.

Only add examples that are acknowledged in-universe.