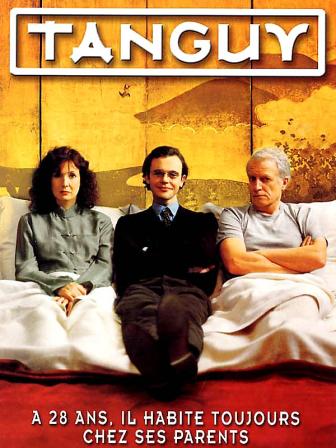 How do you get your grown kid to move the hell out?
Advertisement:

Tanguy is a French comedy directed by Etienne Chatilliez and released in 2000. The title character is a 28-year-old man who lives with his parents and has no desire whatsoever to spread his wings and move out. The only child of a Parisian bobo family, he's smart but selfish, and women, especially Asian ones, somehow find him irresistible. His parents, whose patience is running out, decide to get him to leave by making his life hell.

The film appeared to have hit a chord with the public, as the name "Tanguy" has basically become a generic word for a Basement-Dweller in French-speaking countries, where it's not uncommon to hear people complain that their son is a Tanguy.

As it is, slang moves on and it is starting to fade out.

A sequel, titled Tanguy, le retour ("Tanguy's Return") was released in 2019, seeing Tanguy back from China after 16 years with his daughter Zhu, and settling once again with his hapless parents.