Comic Book / The Books of Magic 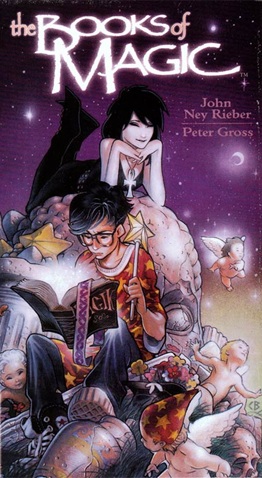 "Boy! Do you believe in magic?"
Advertisement:

The Books of Magic is a comic book series set in the DC Universe's Vertigo imprint, created by Neil Gaiman. It was originally conceived as a "tour" of DC's magical universe, showing off important supervillain and superhero figures, the magical realms, laying down the basic rules of magic, and showing the history of the universe and magic in it from start to finish. The concept was introduced in a 4 issue mini-series written by Gaiman, lasting from January to April, 1991.

The books begin with four famous magicians from DC's history meeting Timothy Hunter, a poor adolescent British boy with messy, dark hair and coke-bottle glasses, who is destined to be the supreme avatar of magic of the age, on par with Merlin in the Dark Ages. They show him everything they know about magic, and at first he refuses the call but then accepts.

After the four-part series, Tim got a continuation of the title written by John Ney Rieber, focusing much more upon himself and the forces dealing with him rather than the DC Universe (this was around the same time the Vertigo line was distancing itself from stuff in the DCU). Unlike, say, Harry Potter, Tim does not immediately start taking magic lessons; instead, he wanders around, wondering what to do with his life now that it has irrevocably become more bizarre, and dealing with all sorts of hard situations.

Everyone and everything he meets wants to use Tim for their own purposes or kill him (except, obviously, Death herself), including demons, fairies, and angels. Tim's friends and family are targeted by supernatural forces beyond imagining in attempts to get Tim to agree to a Magically Binding Contract to own his soul and power. And everything gets really, really weird.

The ongoing series lasted for 75 issues (May, 1994 - August, 2000), and had three annuals and a two-issue crossover miniseries with Hellblazer. It was followed up with a five-part mini-series by Dylan Horrocks called Names of Magic (February - June, 2001), in which Tim is admitted to "The White School", in the vicinity of Gemworld, to study magic in earnest. This served as a transition to another ongoing series written by Horrocks named Hunter — The Age of Magic, which dealt with Tim's last days at the White School, and his life post-graduation. This series lasted for 25 issues (September, 2001 - September, 2003).

There have also been a few spin-off mini-series under the collective title The Books of Faerie, which focus on supporting characters like Titania, Auberon and Molly.

A fifteen-issue Darker and Edgier Alternate Continuity series by Si Spencer called The Books Of Magick: Life During Wartime (July, 2004 - December, 2005) depicted an alternate Tim Hunter — as well as alternate versions of Molly, John Constantine and Zatanna) — caught in a war between the Born (the Faeries) and the Bred (the humans).

Another version of Tim showed up in the main DCU during the New 52 in a Justice League Dark storyline.

In 2018, a new series by Kat Howard started up, as part of the Gaiman-curated Sandman Universe imprint. This series is somewhat of a Soft Continuity Reboot; events from the original series (particularly the miniseries) are referenced, but this new series starts again with (yet another) twelve year old Tim who is still in school and still trying to figure out how this entire "magician" thing is supposed to work.

The original The Books of Magic series and spin-offs provide examples of the following tropes:

The Sandman Universe reboot contains examples of the following tropes: