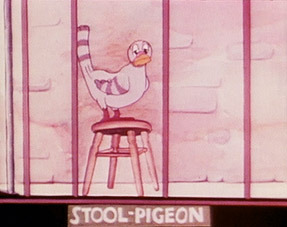 "Oh, he did so do it. I saw him with my very own eyes. So there."
There's a gentleman that's going 'round
Turning the joint upside down
Stool pigeon - ha-cha-cha-cha!
— Kid Creole and the Coconuts, "Stool Pigeon"
Advertisement:

The tattletale. The blabbermouth. The squealer. That no-good snitch! You can't go through life without having the misfortune of coming across someone who's willing to rat you out and get you in trouble.

However, the motivations of the snitch and how they're regarded in a story can vary wildly. Snitches have the reputation of being cowardly weasels, but there are times where a snitch can be responsible or heroic. Due to the sheer prevalence of this trope, there are several important variations:

Petty Patty/Peter: A character that's jealous of the main character or has a petty reason to dislike them, and thus relishes the chance to get them in trouble. You can usually spot them smiling smugly as the main character is chastised for whatever they did. Naturally, they're going to get some payback.

Concerned Claire/Corey: A character that turns in a friend or associate out of genuine concern for their well-being. Maybe their friend is sliding towards becoming a Well-Intentioned Extremist, maybe they're compromising their cause, or maybe they're going to land themselves in jail ...or worse. This character is willing to nobly take any hostility from their friend, because they'd rather see them alive and safe than continue what they were doing. Whether their concern is responsible or misguided can vary.

Whistleblower Wilma/Wilson: A character who sees a villain - or even a hero - breaking the rules and turns them in because of their own moral conscience. The most heroic of all snitches, many whistleblowers risk their friendships, careers, or even their lives to tell the truth.

Disgruntled Daria/Davey: A character that dutifully gives information to their superiors but is then unsatisfied with how they deal with it. If they won't listen to her, then she'll find someone who will! This kind of snitch can vary wildly; sometimes the authorities refuse to listen, so they secretly tell someone else who will take action. However, sometimes the authorities are just acting in a way she doesn't like and thus is going to force their hand. This latter variation can be considered treason and can cause internal strife.

Betrayer Belinda/Barry: A character that sells out their own friends to save his own skin. Maybe they've gotten caught and offered a plea deal, maybe the authorities are offering incentives, or maybe they're just jerks. Either way, this character can end up in a lot of trouble if their friends find out what they did ...

Snobby Sara/Simon: A character that turns in any other character, no matter what reasons they had for what they did. They broke the rules, so those little punks have to suffer the consequences! This character doesn't care about justice or rules as much as they enjoy feeling smug and superior to others.

Obnoxious Olivia/Oscar: A kid character that tattles on someone else for ... well, the thousands of reasons why kids like getting people in trouble. Usually played for laughs, but can sometimes can be taken more seriously, especially if the kid is a young whistleblower or is called a liar.

Innocent Ingrid/Isaac: A character who, along with other characters, has been involved in some activities that have gone rapidly downhill, and turns them in because of this. Maybe they never wanted to do anything bad but suddenly found themself caught up with people prepared and willing to do so, maybe their co-conspirators began doing things that they cannot stand, or maybe they honestly didn't know that their friends or co-workers were doing anything wrong and upon finding out, decide to turn them in.

Drug Debbie/Doug: A character who ends up blabbing about activities to another person without realizing it because they were under the influence of drugs or alcohol. Also a Truth in Television, as drugged people or drunk people often blab the truth at the most inappropriate times due to their inhibitions being loosened. Can sometimes fall under Lacerated Larry if the person was drugged as part of an interrogation.

Obedient Olga/Obadiah: A character who spills the beans because he or she believes this is what a good citizen ought to do, without any personal grudges or strained relationships. Because they hold no grudges, such a person simply blabs and immediately moves on. They may believe obedience to authority to be a virtue and any defiance of it is inherently wrong. They are neither The Mole nor a spy. They never had anything to do with whomever they ratted out in the first place, but simply discovered them and reported them the same way one might report a suspicious package to the police.

Lacerated Lacey/Larry: A character that was simply interrogated to the point of having the information tortured out of them. In many cases, the person may have been an extremely loyal comrade and in normal circumstances would not have ratted out their team. But since Torture Always Works and the cold-hearted villains have ways of making victims talk, the captured member will always be left screaming in the end.

Snitches vary from Gossipy Hens because they're actually telling the truth and usually telling it to a recognised authority, whether it's a parent or the government. This can lead to a lot of Moral Dissonance, because no matter how much of a jerk a snitch might be, the characters wouldn't have gotten in trouble if they hadn't done something snitch-worthy in the first place.

See also The Informant, of which this trope is a Sub-Trope. For instances where the stool pigeon is an actual bird, see Not in Front of the Parrot.

Never consult to this guy about a transgression you did.

Never consult to this guy about a transgression you did.