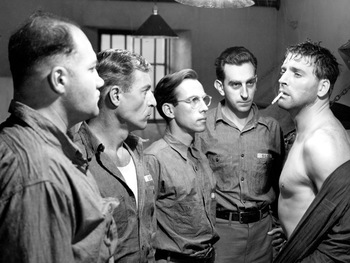 Getting out of the big house...shirtless?
Advertisement:

Joe Collins (Lancaster) is returning to the tough Westgate Penitentiary from solitary confinement. He’s back and he wants out more than ever; his wife is dying of cancer. He tells his cellmates in R-17 — including Tom Lister (Whit Bissell), Spencer (John Hoyt), Robert "Soldier" Becker (Howard Duff), Freshman Stack (Jeff Corey), and Kid Coy (Jack Overman) — about his plans. However, they have a large hurdle in the form of head guard Captain Munsey (Cronyn). He’s a power-hungry sadist who makes their lives miserable and manipulates prisoners to turn against their own friends. A main ally, Gallagher (Bickford), is up for parole, so he won't risk going into an escape plan that may not work.

Together, the men must concoct an escape plan without letting Munsey find them out.

Directed by Jules Dassin, who would later become famous for his great heist film, Rififi. Richard Brooks, who would go on to direct such films as Elmer Gantry and In Cold Blood, wrote the screenplay.