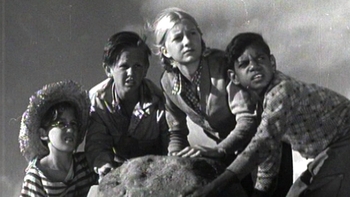 Bush Christmas is a 1947 film from Australia, directed by Ralph Smart.

It's Christmastime...in the Australian bush country, specifically the Blue Mountains of New South Wales. That means it's summer and kids are riding around on horseback. The Thompson kids are excited about an impending trip to town with their father Henry to buy Christmas presents, but in the meantime, tween daughter Helen, her younger brother John, and little six-year-old brother "Snow", are out riding horses. Accompanying them are Michael, a British youngster evacuated to Australia because of the war

, and Neza, an Aboriginal child of one of Henry Thompson's employees.

The kids, out in the country, run across Bill and Jim, a pair of horse thieves. The kids don't pick up on who the two men making camp are, and worse, little Snow mentions that his dad has a mare worth £200. Sure enough, come the next morning the mare and her foal gone. When the grownups won't listen to their story, the kids decide to go after the horse thieves themselves. Will they be able to rescue the mare and her foal? Will they make it back in time for Christmas?

In 1983 this film got a remake, which featured 16-year-old Nicole Kidman in her film debut.