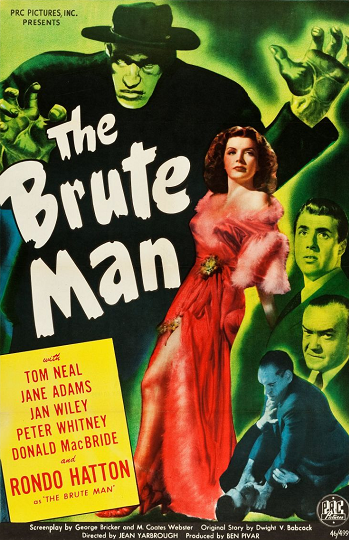 "That's beside the point. The entire city is up in arms and the Creeper goes on killing people."
—Police Commissioner Salisbury
Advertisement:

The Brute Man is a Universal Horror B-Movie that falls under both the Thriller and Horror genres and occasionally dips into Film Noir and proto-Slasher Movie territory. It is the second Creeper film and a prequel to House Of Horrors, which was made and released mere months prior. The story sees the Creeper return to his home city after years of absence to take murderous revenge on his old university classmates for the circumstances that left him with a disfigured face. Universal's faith in the Creeper series was strong, but The Brute Man is its last entry because of the rapidly declining health and eventual death of Rondo Hatton. The Brute Man was his last film.

The Creeper series was announced on November 8, 1944 when trades such as The Hollywood Reporter and the New York Herald Tribune reported that Ben Pivar had been given the task of renewing Universal's horror stable and that the Creeper series was the foremost project. The first film of the series was to be called The House of Horrors. However, as early as December 16, the Showmen's Trade Review and others stated that the first film was to be titled The Brute Man. This name showed up as the first film to be until around July, followed by the first mention of Murder Mansion on September 7. Murder Mansion is the proto-production name for House of Horrors. It's possible that the three names were all tied to the same script, but it's also possible that there were arguments behind the scenes which film should be the first. In the end, The Brute Man became the second film, with filming starting on November 15, 1945.

On February 2, 1946, Rondo Hatton died from the progression of his acromegaly, and his failing health in the months prior affected production of The Brute Man as his scenes needed to be retaken the most by far. House of Horrors was still released on February 22, but The Brute Man was kept back. There are two (non-conflicting) stories as to why. One goes that after Hatton's death from the very thing that got him his contract, Universal worried that releasing the film would generate controversy. The other relates to the merge of Universal and International Pictures in July 1946 and the studio's new A-Movie-centric business model. The horror genre in particular had become synonymous with B-Movies and Universal rapidly got them into theaters before the merge, so The Brute Man became a prime candidate for peddling when it was still on the shelves post-merge. In any case, The Brute Man was sold to Producers Releasing Corporation in August for a little over the cost of production, $125,000, which incidentally makes it one of PRC's expensive films. PRC brought the film to theaters on October 1, 1946, after which it fell off the radar for a few decades. Today, The Brute Man is owned by Cinedigm following its acquisition of Films Around the World.

In 1930, Hal Moffat (Fred Coby) is in his final year at Hampton University and good friends with Clifford Scott (Tom Neal), Virginia Rogers (Jan Wiley), and Joan Bemis (Janelle Johnson). Because Hal is trying to woo Virginia, Clifford sabotages Hal's chemistry test. For his poor score, Professor Cushman (John Hamilton) has Hal stay that afternoon to make it up with some experiments. Furious, Hal destroys an erlenmeyer and is caught in the chemical's explosion. It damages his glands, nerves, and mind, leaving him disfigured and mentally affected. He disappears for some 15 years and returns as the Creeper (Rondo Hatton) to settle the score with everyone he holds responsible. Cushman and Joan are the first two he murders, but then the Creeper meets Helen Paige (Jane Adams), a blind piano teacher. She is kind to him and he abandons his revenge spree to spend time with her. It comes up that a surgery could give Helen sight, but that she can't afford it. The Creeper resolves to help her and breaks into Clifford's and Virginia's home, who are now married and well-to-do, to get money. Unexpectedly, Clifford fights back and the Creeper kills him after all. Having stolen Virginia's jewelry, he gifts the pieces to Helen to sell. However, the jewelry is recognized and Helen is taken to the police station. There she learns that her good friend Hal is the Creeper and ruefully cooperates with the police to set a trap for him with her as bait. All goes according to plan and for her help bringing in the murderer, Captain Donelly (Donald MacBride) and Lieutenant Gates (Peter Whitney) arrange for her surgery to be financed by the city.

The Creeper's past takes inspiration from Hatton's own history and the marketing Hollywood launched around it. Hatton was a popular student and an avid football player since his high school days, taking up coaching and sports journalism when he aged out of his prime. During World War I, Hatton fought in France and was exposed to poison gas. He got diagnosed with acromegaly during the 1920s and by 1938, when Hatton had a handful of film roles to his name, the popular story was that his acromegaly was a result of the gas exposure. Likewise, the Creeper was a popular football player in university and develops acromegaly from being caught in a chemical explosion during a laboratory assignment. A nod is made too to Universal's film history through the presence of a kind and blind musician, which, like it does the Creeper, a decade prior humanized Frankenstein's Monster in Bride of Frankenstein.

Because The Brute Man and House of Horrors were practically produced back-to-back, their credits largely overlap. The directing was handled by Jean Yarbrough, while Philip Cahn did the editing. This includes fitting several scenes of older stock footage in with the new footage. The film's touches of film noir are the contribution of Maury Gertsman.

The Brute Man was the subject of an episode of Mystery Science Theater 3000. It is one of the episodes the writers have expressed regret over because several of the jokes are at Hatton's expense, targeting his looks and performance.