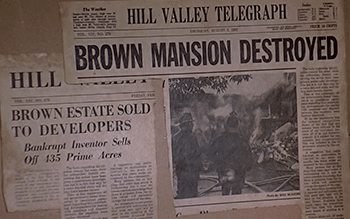 A quick, easy way to give the backstory of a character is through a Flashback, but perhaps you don't want that. Takes too long and inserting a scene suddenly ruins the vibe. Expospeak, then? No, perhaps not. The dialogue sounds very unnatural. So instead, have the camera pan over and briefly pause over a board or a box where there's a bunch of newspaper clippings about what happened before your work takes place. Non-obstructive and quickly establishes the background of your story.