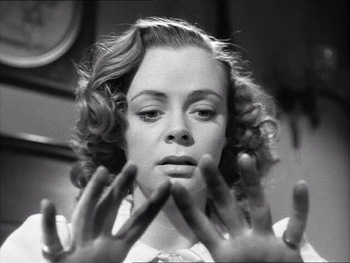 "I took part in pagan rites. I assumed the form of a wolf. I even hunted with the wolves."
Advertisement:

She-Wolf of London is a 1946 horror thriller from Universal, directed by Jean Yarbrough and starring June Lockhart.

People are being attacked by a mysterious individual at a London park, to the bafflement of Scotland Yard. Meanwhile, Phyllis Allenby (Lockhart), a rich heiress who lives nearby, is worried that it's all her doing, due to the legend of the "Curse of the Allenbys". According to the legend, the Allenby bloodline was cursed by partaking in "pagan rites" in the past and they are bound to transform into wolves....