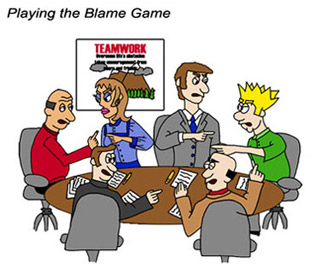 Your Fault! No, your fault!.
Jack: Wait a minute though, I only stole the gold to get my cow back from you!
Little Red Riding Hood: [to the baker] So it's your fault!
Jack: Yes!
Baker: No, it isn't! I'd have kept those beans, but our house was cursed. She made us get a cow to get the curse reversed!
Witch: It's your father's fault that the curse got placed and the place got cursed in the first place!
— Into the Woods

This is when something has Gone Horribly Wrong and it's time to determine who is at fault, but the consequences for this blame can wreck careers and reputations, or even get people killed. Either that or just stubborn pride takes the hit.

So when someone is blamed, that person tries to pass off the blame to another plausible person, and that person either tries to put the blame back on the first person or pass it to someone else. Essentially the blame is now like a game of "hot potato", hence we call it the Blame Game.

A true player of the game will, therefore, work to avoid becoming The Scapegoat at all costs... while doing their best to note who else around them might better fit the role. In bulk, preferably.

The Game can happen in both comedy as well as drama. In Real Life, a staple of wrongfully biased politics/journalism, right after any tragedy. Also common among young children when somebody has done something naughty. As well as every other age group.

The truth of the matter is either the original accused is often at fault, or some of/the whole group are at fault. On rare occasions, it really does turn out to be an unforeseen person or event. Though when blaming most or an entire group when it is a certainty that not all individuals of a group are at fault, whether present or not, is basically a biased scapegoater and/or person.

Compare Never My Fault, when someone consistently tries to avoid taking the responsibility for his or her mistakes, with or without any finger-pointing (but very often with) and see Stopping the Blame Game for when another character refuses to allow this.

Remember, this isn't just trying to pass off blame once. There has to be at least one return volley.